Women in Entrepreneurship and Controversy in Blogging

It’s pretty much common knowledge that there are far fewer women than men running high-tech high-end (meaning visible, getting buzz, getting investment) startups. That’s bad news, right? I thought it was obvious. 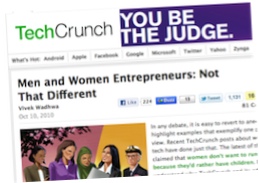 But apparently it’s not obvious. Say, what?

Well, for example, there’s Penelope Trunk’s Women Don’t Want to Run Startups Because They’d Rather Have Children, posted over the weekend on TechCrunch. She wrote:

There’s a reason that women start more businesses than men, but women only get 3% of the funding that men do. The reason is that women want a lifestyle business. Women want to control their time, control their work, to be flexible for their kids.

So having a life is a feminine trait? Work-life balance is a business failing of women? I think not, but she says:

Wow. Do we like stereotypes? At least she’s giving us equal opportunity stereotypes, insulting both genders at once.

I think Penelope Trunk writes stuff like that for the same reason that blowhard talk radio idiots say the dumb stuff they do: it works commercially. Exaggerated opinions on radio generate listeners, and controversial blog posts generate traffic. Penelope Trunk is very smart, very successful, a ground breaker, a great blogger, and she loves controversy.  This is the same woman who posted Get married first, then focus on career as if that were her advice to young women. And Forget the Job Hunt. Just Have a Baby Instead. I like her writing too much to believe she’s serious. Do you think she moves to the absurd to make the opposite point?

What do you think? Do you think gender difference explain why women are under represented in high-tech startups? I don’t.

Read Vivek Wadwha’s thoughtful Men and Women Entrepreneurs: Not That Different on TechCrunch yesterday. You should read it. It’s nice to see common sense backed by research.

Yes, sure there are gender differences. Thank heavens there are. But they don’t justify unequal opportunity. They don’t explain the startups gap.

Vivek, on the other hand, makes two specific suggestions: first, when hiring, interview at least one woman. Second, include one woman on the recruiting team. He concludes:

These are pretty simple remedies. I am not advocating that companies institute any kind of affirmative-action programs or stack the deck against men. But we need to recognize that negative stereotypes such as the ones highlighted in TechCrunch can be harmful and lead to discrimination. Let’s not blame anyone, but let’s act proactively to fix a problem that we all know exists.

8 responses to “Women in Entrepreneurship and Controversy in Blogging”