Why Men With Pens is Written by a Woman. And Why That Matters. 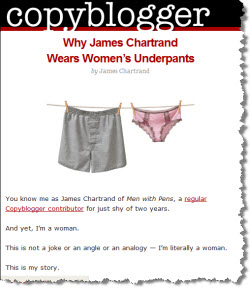 Honestly, except for the name itself, I’ve never cared or wondered whether the author of Men With Pens was man or woman. It’s a good blog for writers. I did assume man, of course, because of the name of the blog, and the byline. This isn’t something I think about.

But I was shocked to read Why James Chartrand Wears Women’s Underpants as a post in CopyBlogger yesterday. It turns out that James Chartrand, author of the Men With Pens blog, @menwithpens on Twitter, is a woman, not a man.

Why do I care? I don’t care that she’s a woman and not a man. It makes no difference to the value of the content.  But I do care about the story she (James Chartrand) tells, and why she uses a man’s name.

Taking a man’s name opened up a new world. It helped me earn double and triple the income of my true name, with the same work and service.

No hassles. Higher acceptance. And gratifying respect for my talents and round-the-clock work ethic.

Business opportunities fell into my lap. People asked for my advice, and they thanked me for it, too.

Did I quit promoting my own name? Hell yeah.

I do believe that the difference between genders is the most interesting thing in creation. But I don’t believe in gender differences in jobs or opportunity and particularly not in writing. My favorite bloggers are about half and half, men and women. I just want the posts to be useful, interesting, amusing, and good. I’m as likely to read Pamela Slim or Anita Campbell as I am to read Seth Godin or John Jantsch. I like to think the world has come a long way since I was born in 1948. That the chauvinism we took for granted without even thinking about it in the 1950s and 1960s has given way to a better, more equal world.

Maybe so; but “more equal” isn’t the same as “equal.” Damn. Ask James Chartrand about that.

Everybody should read Why James Chartrand Wears Women’s Underpants. And everybody who cares about writing and blogging should subscribe to her blog – not because of her gender, or her surprising revelation about gender disguised, but, rather, because it’s got a lot of good content.