Why Failure is Your Key to Success

“The taboo against uttering the F-word grows stronger the closer you get to the top … But here’s where they’re wrong (aside from their egos, and simply being delusional): talking about failure is recognizing reality, and as long as you come to grips with that reality, you have a chance to succeed.” 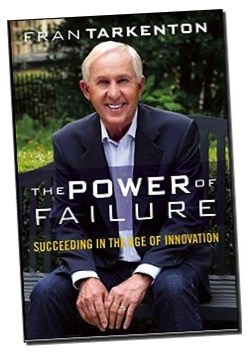 That’s from Fran Tarkenton’s new book, The Power of Failure. Specifically, it’s from his chapter titled “The Peril of Positive Thinking.”  I mention the chapter title because it’s brilliant, and a great example of how Fran keeps surprising the reader with new takes.

It’s a good read and a fun read too, because the flow goes from story to story. In “No One Has an Original Idea” we meet Thomas Alva Edison, and encounter this paragraph:

“No one has an original idea. Not Edison, not Steve Jobs, not Mark Zuckerberg. Every idea builds on ideas that went before it. We can expand our knowledge of ideas by observing, by reading, by talking to people, but we’re never going to have an entirely original idea. It’s what we do with ideas that are out there that counts and that deserves to be called innovation.”

Amen to that. This is real wisdom married to real stories. It’s about leading, managing, doing the hard things, getting things done, building and running a business.

In case you’re wondering, yes, this is the same Fran Tarkenton who is in the National Football League Hall of Fame as a quarterback of the Minnesota Vikings and New York Giants back in the 1960s. His success on the playing field adds some fun stories, but the content here is about business, career, and life – not football.

I met him a couple of years ago in a business context related to social media and Office Depot. I’d watched him on television when I was still a teenager, rooting for him as the quarterback who invented scrambling, still one of the best ever. Yes, I’m a football fan, so I was excited to meet him on a business basis.

That many years later, he’s a vigorous, committed, business leader. He runs a meeting very well. And this is a good book for anybody who deals with startups, running a business, leading people, and managing.