This is about selling coffee stuff; competing with Starbucks. It comes in two parts. First, a word picture, then a cellphone photo.

Today is Friday. I was next in line getting coffee at Allann Bros. Coffee in Eugene, OR (coffee country). The woman in front of me, while being served, turned to a nearby counter and saw a $100 backpacking coffee gadget, picked it up, obviously wanted it, and turned back to the counter and said:

“No,” answered the counter person, “not until Monday.”

I didn’t care myself, and I hadn’t even had my coffee, but I ask you: if you’re the owner of the store, don’t you want that person to say yes? Take the money today instead of waiting until Monday? Do we have any way of knowing or guessing if that customer who wanted to buy today will be back there Monday? I won’t. I only go there when I’m up and out before 6:30 a.m. 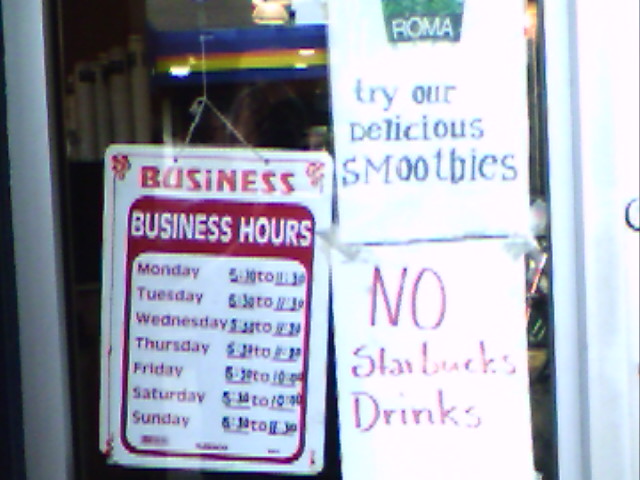 It’s obviously a poor quality cellphone picture, but if you can make it out, it’s another coffee place, two doors down from a Starbucks, with a hand-written sign saying “NO Starbucks Drinks.” Does that make sense to you? Is it good for that business to do?