What Kickstarter Means to You — Maybe

I’ve had several visits to Kickstarter.com in the last week. First because some friends of mine are looking to launch a project there. Second, because I’m getting so interested in crowdfunding. Third, because of the Three Years of Kickstarter Projects infographic on NYTimes.com.

At kickstarter, I saw the Pebble project that’s raised more than $8 million for an epaper watch. It was at $6.6 million when I first saw it last week. This morning it’s at $8.3 million. 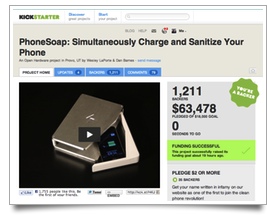 While I was at Kickstarter, I preordered my Phonesoap unit there for $39. I saw Phonesoap at the Rice Business Plan Competition two weeks ago. It didn’t win that contest, but it has now won $63K of the best kind of financing, without question, which is sales.

Every entrepreneur has to go look at what’s happened with that project. Take a step back, exhale, and think of this as the best possible kind of financing: prepaid sales. The people who’ve contributed to Kickstarter don’t get a share of ownership. They get future product, not yet built. And they have to fit into one of the standard kickstarter.com categories. You can get that with the NYTimes infographic.

Need I say more? Go look at it.

So what’s going on at Kickstarter? The best possible financing, sales as pre-sales or pre-order sales. It’s not technically crowdfunding, but it’s better than that, because it doesn’t dilute ownership.

By the way, speaking of crowdfunding, Myventurepad.com this week released a free ebook called The Revolution in Venture Funding, which covers the topic pretty well . Disclosure: I’m one of the authors.