OK, this is cool. The web makes copyright stealing so incredibly easy, and it’s extremely annoying when it happens to you. And it happens all the time. So you have to like this example. 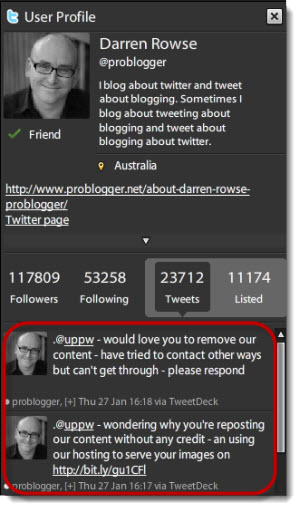 Here, to the right, is what Darren Rowse, blogger extraordinaire at problogger.net, @problogger on Twitter, decided to do about it. He posted it on twitter where his 117,809 followers can see it.

No, I don’t know the facts in this case. If it turns out I’ve become a pawn in some foul plot, unwittingly ganging up with Darren against an innocent photo business, I apologize. It sure looks like United Photo Press is linking to Darren’s work and presenting it as theirs. Right?

I’m jealous. I still remember when a competitor took a GIF my son had done, painstakingly combining all the logos of all the magazines that had reviewed our product, and posted it on their website. I would have loved to have been able to publish that on Twitter.

And while that one is old news, all the time now fly-by-night blogs pick up my stuff, often from here, and post it as their own, presumably for spam or SEO gains. 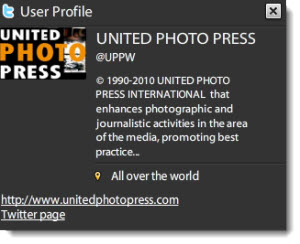 In this case, though, the alleged culprit in this case, United Photo Press, isn’t flying by night. It’s been around since 1990, and one can assume it’s staying around.  So maybe this really works. I hope so. If it’s true, I hope Darren’s tweets get it to stop.

Darren, United Photo Press, can we get an update, now that the problem has been published on Twitter? Was the problem solved?