As the small plane taxied from gate to runway, I felt him before I saw him. He abruptly pushed on the back of my seat as he made his way, stumbling, to the front of the plane. 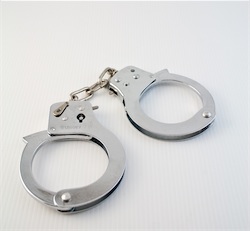 He was a big guy, tall, bulky. One of the police told another one he was “about 240” referring to his size in pounds. I was in seat 1C, right in front, where it was immediately clear something was wrong. We were taxiing to take off, and he was standing right next to me, staring at the flight attendant, not responding with words as she told him, repeatedly, to please return to his seat.

That was a United shuttle flight, San Francisco to Eugene, taking about an hour on a small commuter plane, two passengers on each side of the aisle, 12 or so rows of seats, no first class. My day started a few hours earlier with a recorded message alerting me that the flight my wife and I were on had been canceled. She ended up staying an extra day with our daughter, since they found only one seat back the same day. I got into seat 1C, the last one available, for 6406 yesterday.

Kim, the flight attendant, stood her ground. The big guy just stared at her for a while, ignoring her tensely issued commands. I unbuckled my seatbelt, worried he might do the wrong thing, not wanting to be buckled in if he did. The guy next to me, a young man, did the same. After half a minute or so of pure tension, he mumbled something about the bathroom and went back to seat 8B, the exit row, where he’d started. I worried that he’d had some kind of stroke or something but learned later, eavesdropping on the police, that he reeked of alcohol. And this was an 11 a.m. flight.

Kim the flight attendant talked on the intercom with the pilots. She strapped herself into her jump seat, facing me. The plane remained motionless on the runway.

“We’re going back, right?” I asked her, quietly. She nodded, “yes, we have to,” she said. “We can’t take chances. Absolutely no wiggle room.” There were no announcements to the passengers until later, after he’d been removed.

Before we got to the gate, while we were moving on the tarmac, he was suddenly up again, standing right in front, staring at the flight attendant, saying nothing. She stood straight and insisted, repeatedly, that he should return to his seat. The plane stopped. Two men emerged from the cockpit, maneuvered themselves between him and the flight attendant, and walked him back to his seat. Then they went back into the cockpit and finished taking the plane back to the gate.

As soon as the plane arrived, a crew of uniformed policeman boarded the plane to escort the man off. Then the pilots got on the intercom and reassured us that we would be on our way shortly. Kim the flight attendant, who got through some tense moments admirably, allowed herself to turn white and appear shaken only after the mini-crisis was done. She reassembled herself quickly. The police quickly took some statements and we took off for Eugene.

I admire fiction writers. I’d like to be able to come up with a made-up story, how he was drugged by business associates after a bad startup deal or something like that, or maybe that he was actually suffering a stroke and saved himself by getting himself off the plane. But in the meantime, it seems like just a simple story of a drunk guy on a small plane. I know it’s not news, not even that unusual; but I share it because it happened to me (and everybody else on that flight) yesterday.

It was good to get back home to Eugene. I’ve had too much travel lately.