People ask why Palo Alto Software is based in Eugene, Oregon. I think business stories are a good way to communicate different elements of business, so I’ve decided to share that in detail. This is why we moved Palo Alto Software to Eugene.

One day in the late 1980s my wife Vange asked me this question:

“Tim, we put up with all the down side of you insisting on doing your own business. Why don’t we get the upside too? Why don’t we just move to somewhere else, somewhere where we want to live?”

It wasn’t just that one question that one day. We wanted to move. It was nothing against Palo Alto, which is an ideal location in many ways. Palo Alto is right in Silicon Valley, it contains Stanford University, it has beautiful neighborhoods, the second highest number of graduate degrees per capita in the U.S., the second highest average income in California, and we had a nice house.  We, however, wanted to move somewhere else that had less traffic and a different, if not higher, quality of life. And we wanted to reduce our fixed costs, because our variable income from consulting was driving us crazy. Theoretically we chose Eugene after a rigorous analysis of university towns in the west, including Chico, Santa Cruz, and Irvine in California, Boulder in Colorado, Spokane and Walla Walla in Washington, and Corvallis and Eugene in Oregon. We looked at factors including pricing, neighborhoods, outdoor activities, quality-of-life indicators, pollution, nearby airports, and others. Eugene came out as the best bet.

In truth we chose Eugene because we had lived there before and we liked it. I did an MA in Journalism there (University of Oregon) after we were married and before we had kids. We’d been visiting off and on for vacations. We’d been happy there. It was a known quantity. 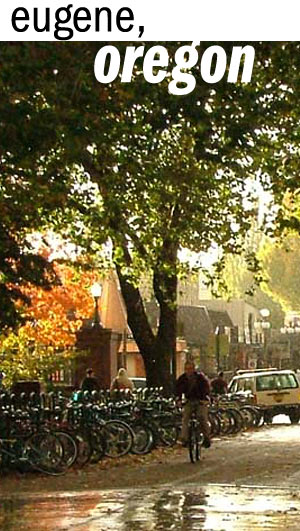 One thing that helped make a move possible was the lack of employees. We were a very small company surviving on my consulting income. I was the only full-time employee.

Although the company kept, and still has, its original name, it was a very different company from what it is now, with 70% market share in a product business and 40 employees. It was essentially a professional service business entirely dependent on my consulting, but one whose owner nonetheless stubbornly insisted on following a long-term plan to “sell boxes, not hours.” The vast majority of the revenue came from consulting with Apple Computer’s Apple Japan subsidiary, based in Tokyo. The software product was called Business Plan Toolkit, which was essentially a nice manual (if I do say so myself) on how to do a business plan along with templates for Mac or PC, Lotus 1-2-3 or Microsoft Excel. We advertised in the small ads in the back of computer magazines, and in some special promotions like in the box with Microsoft Excel. The software business lost money every year, but I supported it with consulting revenue.

Judy David was director of finance for Apple Japan. On one of my trips to Japan — I was going about one week a month, consulting in strategic planning — I had lunch with Judy and told her we were thinking about moving from Palo Alto to Eugene. Judy, one of the smartest and most competent people I’ve ever worked with, said the following:

“Tim, we don’t care where you get on the plane.”

She had a good point. Airfares, which the client paid, were about the same from Eugene to Tokyo as from San Francisco to Tokyo, so Judy’s comment eliminated the main business objection.

The actual moving was hard for lots of reasons not directly related to business: finding a house, dealing with teenage children, finding movers, things like that. On the business side, I contacted some local agencies responsible for fostering economic growth, from which I got good recommendations for banks, bookkeepers, and insurance agents.

Of course we didn’t change the name, despite the name tie-in to Palo Alto the city. By the time we moved to Eugene we had already existed for five years, we had products in the market, advertising, and branding established. Palo Alto Software was always a good name for the company, because it evokes both Stanford University and Silicon Valley.

So Palo Alto Software moved to Eugene, Oregon, in 1992.