Imagine yourself standing at a trade show booth, attending to customers, offering information to potential customers, doing business. Your company paid thousands of dollars for the booth space, plus time and effort and shipping to get the booth and related materials there, set it up, and do your sales and marketing at the event. 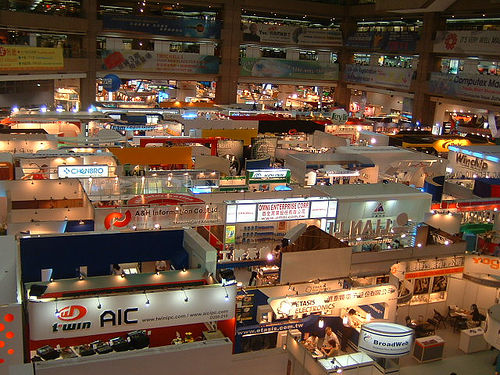 What you want, naturally, is customers to talk to. Everybody hates an empty trade show. Standing in an empty booth, waiting for somebody to show up in the empty aisles, is boring and bad for your feet. Standing in a busy booth, talking to the people you came to see, is
exhilarating. And exhausting as well, but when it’s a constant conversation with a lot of interested people all day, it’s great.

What you don’t want is to be standing in your own booth doing your own business and having people come up to you to sell you whatever it is that they are selling. What are people who do that thinking? Isn’t this worse than cold calling, in that you’re in a spot you can’t leave?

And it gets worse. Some people, without booths, roam the trade shows like sharks, pigeonholing innocent trade show attendees as potential customers, acting as vendors without buying a booth, and most irritating of all, standing in or near the booths of their competitors. So are they smarter than the rest of us who have paid for the booths?