I was asked recently for a list of things that annoy me in angel investment pitches from startups. I’ve done this before, so there will be some duplication here. But here is my top 10 pitch fails list. 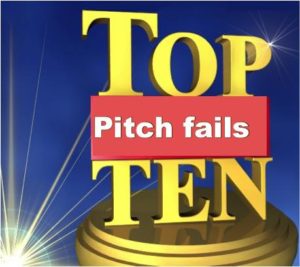 This is another of my Quora answers. The original is at: What are the things that annoy you when entrepreneurs pitch to you Angels and VC? And someday I’m going to answer the question what annoys me about my fellow investors. Because writing these items generates a thought about that side of the table too.