Time Is not Money. Time is Life

I’ve had a lot of business training, and the privilege of listening to some great speakers, but that simple thought is something my wife taught me, in the early years of our marriage, when we had young kids.

I was one of those who started working a lot to pick up more money. I had a full-time job as a business writer, and a second just-as-good income from freelance writing. But it was in Mexico, the peso was overvalued, we had three kids in four years, and journalism doesn’t pay well; so we were always broke.

But — and this is important — early on, when I started to get second thoughts, wasn’t sure if I could go camping on the weekend because I had too much work, she wouldn’t let it happen — well okay, sometimes it was obvious, I had to do the extra work, so she wasn’t 100% consistent — but most of the time, she’d remind me:

“Tim, we won’t get these times back. These kids won’t always be little. It won’t be long before they won’t even want to go with us.”

And also, at least within reason, she was good about not letting chronic lack of money interfere with family times, like vacations. 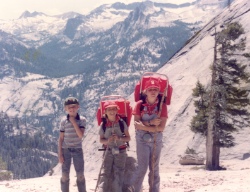 While broke, we’d go backpacking instead of Disneyland, or rent a cheap houseboat for three nights instead of seven, but we’d have our time relatively well spent.

There again, we’d stretch the money farther than we thought possible, but Vange would remind me, at the key moments, “we don’t get these times back.”

Nothing is always true. I worked on weekends off and on for years, and still do. And she made that easy for me when it clearly had to be done. But she also booked vacations, even relatively cheap ones like the backpacking, well in advance so I couldn’t blow them off for work.

And, as I hope you can tell, I’m grateful.

Does this reflection seem out of place for a mostly-business blog? Maybe, but actually, as I think of it, no, it isn’t. Because the biggest mistake most of us make in business is forgetting that business is not our first priority.

I forget where I first heard the cliche: “Nobody on their death bed wishes they spent more time in the office.”

Why this topic now? Thankfully, not a health problem, or at least none that I know of. Maybe it’s that our youngest is off to her last year in college tomorrow, making this her last true summer vacation. But mostly, I think,  because I just finished reading Death of the Clock: Reclaiming Your Time by Jonathan Mead on Zen Habits:

We always find more things to do, more projects to work on, more ways to improve and optimize. But when we base our happiness on achievement, we’ve joined the cult of productivity. Being productive is no longer a means to an end. It’s the end entirely. And it’s a sickness.

Here are some signs you’ve contracted the productivititis:

Part of the reason for this obsession with productivity is we think time is money. But time is not money. Time is life.”

Wow. That’s beautifully put? Something everybody in business should think about now and then … or maybe more often than just now and then.

And, although I’m going to stop here, Jonathan doesn’t. He goes on to list eight suggestions: keep in balance, stay in perspective, say no … but do yourself a favor, and read it as he wrote it, not just my summary here.

What? You don’t have time for that?