Big squashes little. The elephant steps on a mouse and kills it, but never even notices. We stop on ants on the sidewalk without realizing. 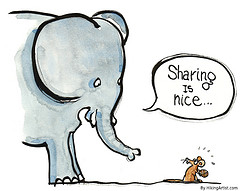 You can probably think of a lot of these cases.

I had a friend who rode a big wave in the late 1980s with a PC-compatible add-on board that enabled a PC to send a fax as easily as printing a document. It was a huge win. Millions of dollars were made. Then Microsoft added a fax facility into a new version of Windows. Pop, crackle, snap.

At about the same time, there was a company in Canada that had a huge business selling compression software that worked with PCs. Then Microsoft bundled compression into a new version of Windows. Pop, crackle, snap.

It’s part of life in the world of startups and high tech. Big companies kill little companies without even knowing, much less caring. No law against it. No reason not to?