The Web as Random Acts of Kindness 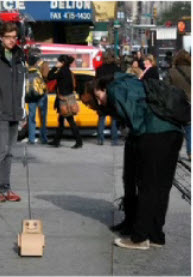 Researchers put a cute-looking cardboard robot on the streets of New York. It could only go forward but it had a note asking people to help it to its destination. It got there quickly with the help of 43 people. They asked for nothing in return.

A teenager got caught on YouTube with a humiliating video that spread like wildfire. Editors at Wikipedia make a point of keeping his name off of the story.

The Wikipedia itself is a marvelous example of people helping people, for free, because they want to.

People helping people, asking nothing in return. In the TED talk here, Harvard Law professor Jonathan Zittrain talks of the web as random acts of kindness. Node by node, computers are shared. Volunteers run the soft spots and correct problems. There’s a very refreshing optimism here, a reminder that technology isn’t necessarily making us all more lonely and isolated.

(If you don’t see the video here, you can click here for the original on the TED site.)

Here is more on Jonathan Zittrain from the TED site:

He is an investigator for the OpenNet initiative and co-founder of Harvard’s Berkman Center for Internet and Society, has long studied the legal, technological and world-shaking aspects of quickly morphing virtual terrains. He performed the first large-scale tests of Internet filtering in China and Saudi Arabia in 2002. His initiatives include projects to fight malware (StopBadware) and ChillingEffects, a site designed to support open content by tracking legal threats to individual users.

(Photo credit: that’s a screen shot from the video of the talk, about 17 minutes in.)