It’s about time. In the midst of cloudy partisan politics and shouting on both sides, with small business often in the middle like the foil for the arguments, here’s a federal government move that makes sense. TechCrunch has a good summary, called The Startup Visa: Create Jobs, Get A Green Card. As we used to say in the 60s, “right on!” Here’s a quick summary: 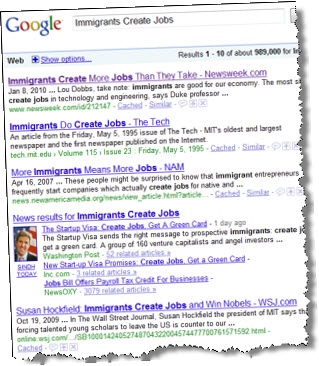 The Startup Visa Act of 2010 would create a two year visa for immigrant entrepreneurs who are able to raise a minimum of $250,000, with $100,000 coming from a qualified U.S. angel or venture investor. After two years, if the immigrant entrepreneur is able to create five or more jobs (not including their children or spouse), attract an additional $1 million in investment, or produce $1 million in revenues, he or she will become a legal resident.

Immigrants are by definition people who move themselves from where they were to where we are to improve their lives. I’m very glad to welcome them into our society and our economy with open arms. And entrepreneurs in the mix are good for all of us. More competition, sure, but bring it on. New customs, new languages, more mix, that’s great too. We all win. Variety is the spice of life, and xenophobia is pretty much a euphemism for some ugly bigotry.

If the merits of this idea aren’t completely obvious to you, I suggest you search Google for “immigrants create jobs” and read the first four or five hits that come up, as shown in my illustration here.

For the record, I don’t like writing about government small business policies in this blog. Almost all of it is just partisan politics, divided in the ugly and thoughtless way so much of our discourse is in this country. First you take sides, then you think. Put forth talking points instead of discussion. If I say something good about the current SBA it’s because I’m pro-Obama. If I criticize it’s because I’m against Obama. And so forth.

But this one seems so obviously good for all that I can’t resist posting about it. I hope they don’t screw it up with the politics around it.