What’s the difference between a journalist and a blogger? I see this from both sides because I was mainstream journalist for 10 years in the 1970s, then entrepreneur and consultant, software guy, and lately I blog a lot.

Real journalists have opinions. Editorial writers and columnists are also journalists, not just reporters. But if it’s real journalism, opinions are framed as opinions, declared openly, and not masked as facts.

So I say lots of bloggers are journalists. And a lot of people writing for or appearing on mainstream news media are not. 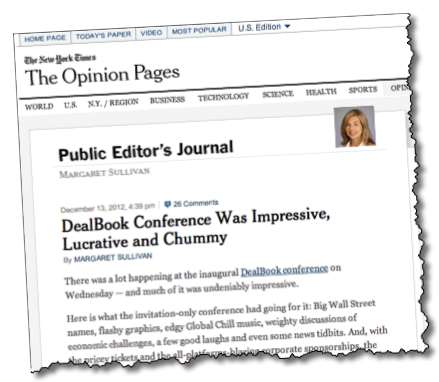 Earlier today I posted Are Tech Conferences Distorting the Business News? over on smbplans.com. I linked there to a trio of posts debating the ethics of the New York Times Dealbook conference, which brought tech company leaders together with opinion leaders and journalists.

Dave calls this “access journalism.” He makes it seem sinister. He quotes the New York Times’  own columnist Margaret Sullivan writing, in her column, that the event made her “a little queasy. It didn’t include …

…A great deal of distance between sources and those who cover them — something traditionally thought to be a bedrock journalistic idea.

Dave links back to the early days of Silicon Valley in the 1980s and some run-ins he had with journalists and the dark side of popularity, plugs, and mixing business relationships with news reporting.

And I say that’s been going on forever.  There are some very practical natural phenomena related to what Dave Winer is calling “access journalism:” 1.) Good journalism wants to quote legitimate sources to turn opinions into reporting. 2.) You can’t quote people you can’t reach. 3.) Good quotable experts and well-positioned people are good to know; access to those people is good to have.

In fact, tech conferences notwithstanding, What I love about these days in reporting and journalism is that access is orders of magnitude easier today than it was when I was doing it in the 1970s. We depended on phone calls to gatekeepers (assistants, receptionists, etc.) and treasured relationships that have us a direct telephone number, which was as good as it got. Journalists these days, who can easily use email and Twitter, have no idea how good they have it (in comparison to then).

The ethics haven’t changed. Accessibility has.