The Curious Paradox of Copying and Creativity

A couple of months ago I picked up this post on TechCrunch, which sort of accuses Apple of copying its iBooks application for the new iPad. 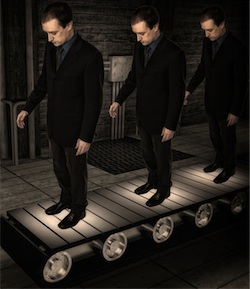 I hate business copycats. Drives me crazy. As Palo Alto Software’s Business Plan Pro grew up, others copied our tag lines, our packaging, and the software. I hated that.

In the retail business you have some companies who live on copying packaging. They put imitation products inside imitation packages to fool people, so they get the wrong thing. I hate that. How do they live with themselves?

But it’s not illegal.

The original Macintosh operating system borrowed from an earlier mouse and window system developed by Xerox. The iPod was not the first MP3 player, nor is the iPad the first tablet computer. These were not new ideas, but they were improvements.

And all the cool new phones now are copying the iPhone.

Do we hate the people who copy ideas? We all do it. Kids learn their moves in sports by copying other kids. We learn to write better by copying writing we like. We learn to get along with people by copying people.

The entire history of human creativity is built on copying. What, if not copying, is the cause of those identifiable periods in music and art and writing, like the Baroque or Renaissance? What except copying makes Gothic cathedrals? Try to name a good movie that didn’t borrow from some earlier movie. Even Shakespeare was often redoing older classical themes.

And yet, when I look at all the stuff in the market that’s copying something else, it makes me mad. Do your own thing. Be original. Make it better. Don’t just copy my thing. Even if it’s barely legal, it’s still sleazy.

A lot of great art starts with copying, borrowing themes, ideas, and so on. But business, starting with one idea and adding to it, making it better, creating new things based on old things, that’s progress. Business copying, looking like somebody else just to steal some respect, is just bad business.