Teacher’s Lament: Where are the Well-Behaved Woodstock Kids Now That We Need Them? 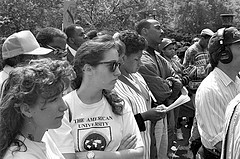 I just talked to an old teacher and longtime friend who said this country needs a “million-teacher march on Washington.” We’d been idly chatting about my post here last Monday on what Woodstock meant when he launched into a rant. He agreed with my idea that half a million people surviving three days together without police or authority, with no riots, was an important social milestone. And then he added:

“Woodstock could never happen today because back then this country cared about raising children, and education. That whole generation of Hippies grew up in a society that respected education and order.”

What? Hippies, respect, education order? My teacher friend is about five years younger than me, so he’s in his middle fifties. Was this some kind of baby-boomer post-LSD flashback or something?

I don’t like generalizations about kids these days, that sentiment is too trite. Old people like me always gripe about younger generations. In fact I posted my support for Generation Y here a couple of weeks ago. Still, the anger and frustration of a long-time teacher is scary.

And it gets worse.

His reference to a million-teacher march was about frustration with teachers quietly accepting an astonishing decline in the quality of education in this country. He said that teachers have been relegated to apparatchik status; that they should be ashamed of their failure to cry out against the decline of teaching in classrooms. He said:

“I still like the teaching. I like the subject matter and the kids. It’s the crushing disinterest of parents and bureaucrats that kills me. We’re just babysitting (he teaches high-school English). It’s not exactly that we don’t have order, or materials, or respect, or support from parents. It’s not exactly that we’ve made mindless uncritical and superficial self esteem more important than learning anything. It’s that nobody really gives a damn whether we’re actually teaching or the kids are actually learning anything, as long as nobody makes waves.”

He hasn’t scheduled the march yet. He promised to let me know if he does. And I’ll pass that on.