Survey: What are CEOs Thinking?

(I posted this yesterday on the Huffington Post. I’m reposting it here for your convenience. Tim.)

To me, this is good news. McKinsey’s latest CEO survey (registration required) shows that enterprise CEOs worry about global warming and environmental issues these days, where previously their main concern was about public opinion against so-called offshoring. I say this is good news because the environment threat is real and what this survey called offshoring is nothing more than a natural phenomena of changing economics in different countries.

Frankly, I don’t trust opinion surveys. People don’t tell pollsters what they really think; instead they say what they want to hear themselves saying. I assume the CEOs in this survey did that, like everybody else. Actually, having run a company myself for 20 years now, I’d assume that CEOs are even more likely than most people to answer what they consider correct, rather than what they really think. You learn that fairly quickly.

Still, even with that caveat, the change in two years seems significant. When asked to list the top three sociopolitical issues they expect to see in the news, 51 percent of the CEOs included “environmental issues, including climate change.” That 51 percent compares to only 31 percent two years ago. Offshoring was mentioned by only 25 percent this time around, compared to 42 percent in 2005.

That one, furthermore, is an easier question than the one that follows it: name three issues that will affect shareholder value. The first question predicts news values, and this one predicts stock values. I think we should pay more attention when CEOs are talking about issues that affect stock prices. And here, too, the big issues have flipped, from offshoring two years ago to environment this year. I think that’s a good sign. Do we worry, though, that only one in five cited demand for healthier, safer products as a possible issue affecting shareholder value? Or is this merely a reflection of not sharing concerns that don’t sound good when spoken aloud? 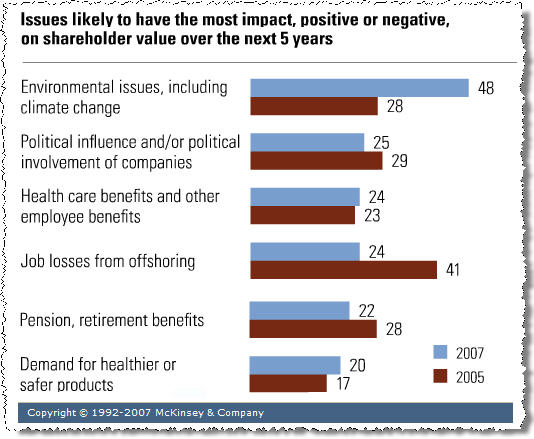 About two thirds of the CEOs said big business is “polluting, damaging the environment.” Four in ten say large companies put profits ahead of people’s well being, and a third say they are exerting improper influence on governments. For the record , when asked what big enterprise does for the public good, 65 percent say jobs, four of ten cite research and making things, and only 16 percent say supporting, preserving the environment (you can click the chart for more details).

What isn’t clear here is whether CEOs are talking about what the companies they run actually do, or what they see in the world in general, the rest of the big companies. Is it bad news that two of every three CEOs say big business is polluting the environment, or good news that so many recognize it as a problem?

What to do about sociopolitical issues? CEOs were asked to compare usage vs. effectiveness of tactics for managing sociopolitical issues. Although they guessed PR and policies on ethics were the most effective tactics, they also thought PR and lobbying are used a lot more than changing policies. The CEO answer is that companies are still doing PR and lobbying a lot more than substantial change. Both of these two tactics were cited by 44 percent as among the tactics used most frequently. 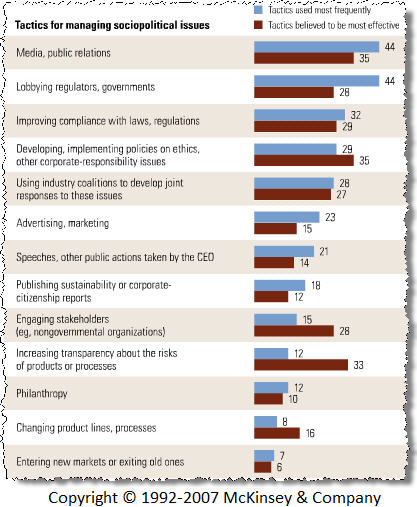 The survey seems to indicate that PR and lobbying are used too much, more than their effectiveness warrants. I see that in the gap between usage scores in blue and effectiveness scores in red, on the chart above. And on the other side of the coin, tactics including engaging stakeholders, increasing transparency about products and process, and changing product lines and processes are underused. Does this mean we’ll see big business moving towards less PR and more effective business change? It’s an interesting thought, not answered here, but at least it’s brought to the surface.

Here, too, as with the earlier question of doing harm or good, we can’t tell whether this is what CEOs are saying or what their companies are actually doing. Still, there seems to be healthy change regarding the awareness of environmental issues, and I’m happy to see these questions being asked.

Is this what CEOs are thinking, or what they’re saying? Put yourself in the CEOs’ place, on the phone with the McKinsey Newsletter’s researcher. Do you answer what you’re really thinking and doing, or what makes you feel better about yourself and your company? Is there accountability involved?

You decide. I’m not sure.