How much equity do I have to give to angel investors? If you’re a startup founder looking for angel investment, you need to understand valuation. It’s a buzzword that people use in other contexts, too, which adds to the confusion. But it’s ultimately what determines how much of your company your investors will get, and how much you keep, if you manage to land an angel investment deal. So it’s a critical question that comes up a lot. 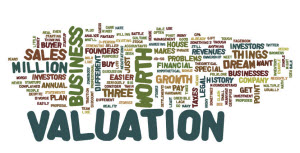 Equity means ownership. So 25% equity is 25% of the ownership of the business. Usually that’s a matter of shares. The math is fairly simple, but important: Logically, if an investor gives you $250,000, on a valuation of $500,000, that means half your company. The investor owns half, you own half. If the investor gives you the same $250,000 on a valuation of $1 million, then that means the investor gets 25%, you keep 75%. (Technically that’s what they call pre-money valuation, and there is also post-money valuation, but I’m not going to deal with that here. You get the point.)

What I’ve seen in practice, in nine years of membership in an angel investment group, is that valuation is an agreed-upon guess. There are no formulas commonly accepted formulas (although there are some formulas, such as you’ll see in this post from the angel capital association; it’s just that I rarely see them used in practice). In my experience, what really happens is all about saying no. Investors say no to valuations that are too high, startup founders say no to startup valuations that are too low. When the startup needs $250,000, the founders are rarely going to accept valuations of less than $1 million, because they need to maintain substantial ownership. When investors aren’t comfortable with valuations that high, they most often simply pass on the investment. I don’t see discussions in detail of components of valuation, like one sees in home buying transactions when buyer and seller go into details of square footage and comparable deals in the neighborhood.

Angel investment deals often postpone valuation by using convertible notes. The note is debt, supposedly to be paid off; but convertible means both sides intend to convert that debt to equity shares later, so that it should never be paid off, just converted to shares. In that case, angels are saying essentially, “we believe in you enough to give you this money, but we’re not sure of your valuation, so we’ll postpone that for later.” What both sides want is a follow-on investment, they hope for more money, from venture capitalists, to set the valuation later.

Five things you need to know about valuations

If it hasn’t come up yet, it will. Every business deals with valuation eventually. The place any business sees it is during the early investment phases; but most businesses don’t get investment, so they can ignore it at that point. But then if it survives, or grows, valuation comes up again, because even if the business is immortal, the people aren’t: so eventually you either sell it or pass it on to a new team, an acquiring company, or your own family. And there’s the divorce and estate planning elements that require valuation. So every entrepreneur and business owner should have some idea what it is.