Continuing my series on standard business plan financials, this is an example of a startup sales forecast. It’s a direct follow-up to yesterday’s How to Forecast Sales. The goal is to take a hypothetical case and open up the thinking involved, not so anybody just copies it, but rather to serve as an example. The underlying goal is to open up the idea that forecasting isn’t a technical feat; it’s something that anybody can do.

We had Garrett the bike store owner yesterday. Today it’s Magda, who wants to open up a new café in an office park. She wants a small locale, just six tables of four. She wants to serve coffee and lunches. She hasn’t contracted the locale yet, but she has a good idea of where she wants to locate it and what size she wants, so she wants to estimate realistic sales. She assumes a certain size and location and develops a base forecast to get started.

Establishing a base case

She starts with understanding her capacity. She does some simple math. She estimates that with six tables of four people each, she can do only about 24 sit-down lunches in an average day, because lunch is just a single hour. And then she adds to-go lunches, which she estimates will be about double the table lunches, so 48 per day. She estimates lunch beverages as .9 beverages for every lunch at the tables, and only .5 beverages for every to-go lunch. Then she calculates the coffee capacity as a maximum of one customer every two minutes, or 30 customers per hour; and she estimates how she expects the flow during the morning hours, with a maximum 30 coffees during the 8-9 a.m. hour. She also estimates some coffees at lunch, based on 3 coffees for every 10 lunches. You can see the results here, as a quick worksheet for calculations. 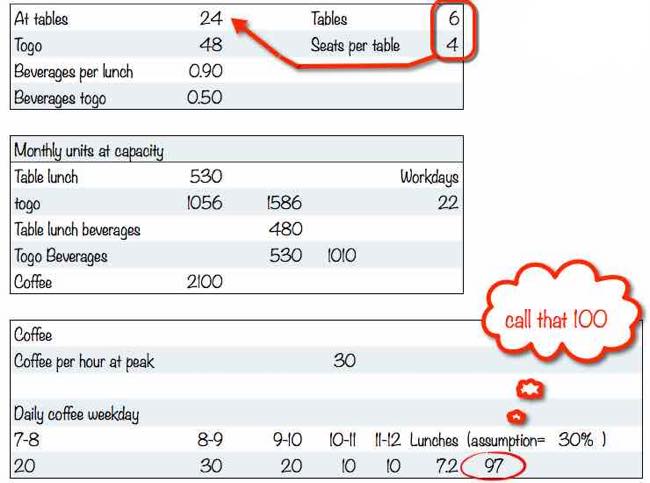 Where do those estimates come from? How does Magda know? Ideally, she knows because she has experience. She’s familiar with the café business as a former worker, owner, or close connection. Or perhaps she has a partner, spouse, friend, or even a consultant who can make educated guesses. And it helps to break the estimates down into smaller pieces, as you can see Magda has done here.

And, by the way, there is a lesson there about estimating and educated guesses: Magda calculates 97 coffees per day. That’s really 100. Always round your educated guesses. Exact numbers give a false sense of certainty.

She then estimates monthly capacity. You saw in Illustration 7-2 that she estimates 22 workdays per month, and multiplies coffees, lunches, and beverages, to generate the estimated unit numbers for a baseline sample month.

So that means the base case is about 1,500 lunches, about 1,000 beverages, and about 2,000 coffees in a month. Before she takes the next step, Magda adds up some numbers to see whether she should just abandon her idea. At $10 per lunch and $2 per coffee or beverage, that’s roughly $15,000 in lunches, $2,000 in lunch beverages, and $4,000 in coffees in a month. She probably calls that $20,000 as a rough estimate of a true full capacity. She could figure on a few thousand in rent, a few thousand in salaries, and then decide that she should continue planning, from the quick view, like it could be a viable business (And that, by the way, in a single paragraph, is a break-even analysis).

From base case to sales forecast

With those rough numbers established as capacity, and some logic for what drives sales, and how the new business might gear up, Magda then does a quick calculation of how she might realistically expect sales to go, compared to capacity, during her first year.

Month-by-month estimates for the first year

Month-by-month estimates for the first year

All of which brings us to a realistic sales forecast for Magda’s café in the office park (with some monthly columns removed for visibility’s sake). This is a spreadsheet view, so, if you’re a LivePlan user, all you need is to figure the assumptions and the software will do the calculations and arrangement.

Notice that Magda is being realistic. Although her capacity looks like about $20,000 of sales per month, she knows it will take a while to build the customer base and get the business up to that level. She starts out at only about half of what she calculated as full sales; and she gets closer to full sales towards the end of the first year, when her projected sales are more than $19,000.

Important: these are all just rough numbers, for general calculations. There is nothing exact about these estimates. Don’t be fooled by how exact they appear.

Notice how she’s working with educated guessing. She isn’t turning to some magic information source to find out what her sales will be. She doesn’t assume there is some magic “right answer.” She isn’t using quadratic equations and she doesn’t need an advanced degree in calculus. She does need to have some sense of what to realistically expect. Ideally she’s worked in a restaurant or knows somebody who has, so she has some reasonable information to draw on.

We’ve seen direct costs already, in the previous section. They are also called COGS, or cost of goods sold, or unit costs. In Magda’s case, her direct costs or COGS are what she pays for the coffee beans, beverages, bread, meat, potatoes, and other ingredients in the food she serves.

Just as with the sales categories, forecast your direct costs in categories that match your chart of accounts.

So, with her unit sales estimates already there, Magda needs only add estimated direct costs per unit to finish the forecast. The math is as simple as it was for the sales, multiplying her estimated units times her per unit direct cost. Then it adds the rows and the columns appropriately. 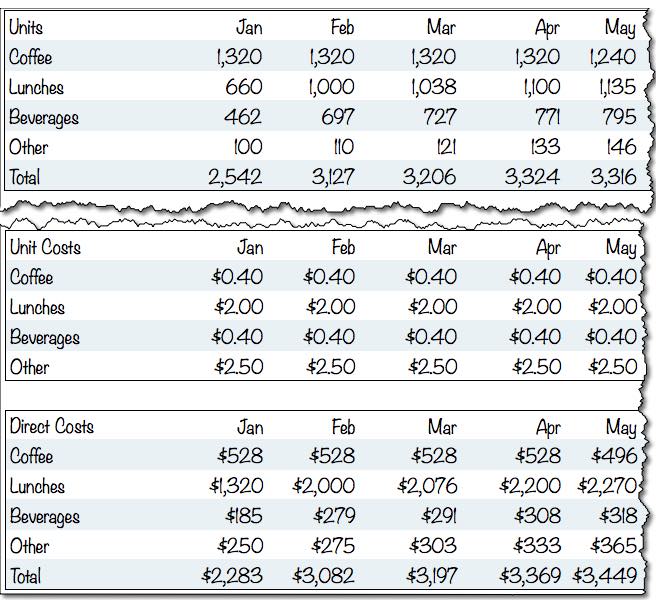 Here again you see the idea of educated guessing, estimates, and summary. Magda doesn’t break down all the possibilities for lunches into details, differentiating the steak sandwich from the veggie sandwich, and everything in between; that level of detail is unmanageable in a forecast. She estimates the overall average direct cost. Coffees cost an average of 40 cents per coffee, and lunches about $5.00. She estimates because she’s familiar with the business. And if she weren’t familiar with the business, she’d  find a partner who is, or do a lot more research.