The Chronicle of Higher reported last week on this news item on a social media director getting caught lying about her resume and exposed via social media: 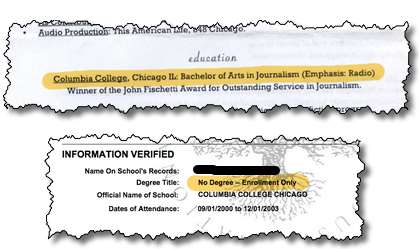 … social-media director quit her post on Monday after it was alleged that she had lied about graduating from college on her résumé—an assertion that, ironically, first bubbled up on social media.

Somebody went to the trouble of getting her resume from public documents and paying to have it verified (or not) by the National Student Clearing house; then posting the proof over a Reddit site:

According to The Michigan Daily, a recent thread in the university’s Reddit community alleged that [she] had not graduated from Chicago’s Columbia College despite claiming a degree on her résumé and job application. The user making the allegations, who signed the message as a “Concerned Taxpayer,” posted [three] images as evidence, asserting that they had been obtained through public-records requests.

So there we have both transparency and authenticity in the new post-social-media landscape. We talk about it. We write about it. Lying is more likely than ever to come out.

The story here isn’t just about social media. This is also about people, revenge, and karma. The real story hidden here is the what-did-who-do-to-whom story behind the scenes. Clearly “concerned taxpayer” spent time and money on a quest. Why? Jealousy? Getting even for something? Relationships gone bad. There’s a story there. Right? What motivates a person to go exploring in the resume and job situation of another?

Live by authenticity, die (or lose a job) by authenticity. No way out. But damn! That’s a nasty piece of social media behavior. Was it justified? All for good? We’ll probably never know.

Old Chinese proverb: “He who seeks vengeance must dig two graves: one for his enemy and one for himself.”

(Based on my previous post on my other blog at smbplans.com)