Paul Graham: A Company is Defined by the Schleps It Undertakes

Paul Graham has posted a(nother) brilliant essay, this one called Schlep Blindness, which is about hackers and startups and “tedious unpleasant tasks” (which he calls schleps, from the Yiddish, and of course popular culture).  Here’s what he says: 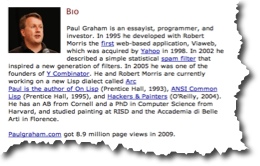 No one likes schleps, but hackers especially dislike them. Most hackers who start startups wish they could do it by just writing some clever software, putting it on a server somewhere, and watching the money roll in—without ever having to talk to users, or negotiate with other companies, or deal with other people’s broken code. Maybe that’s possible, but I haven’t seen it. …schleps are not merely inevitable, but pretty much what business consists of. A company is defined by the schleps it will undertake. And schleps should be dealt with the same way you’d deal with a cold swimming pool: just jump in.

To me that’s a sudden gust of cold-but-fresh air, a badly-needed reminder of fundamentals, a refreshing change from most of the standard stuff of entrepreneurship lore and literature. Notice that in this case it’s not about the idea, or the funding, or the plan or the pitch — it’s about the work. And doing things you don’t like to do.

I particularly like this point, clearly one of those sad-but-true realities:

The most dangerous thing about our dislike of schleps is that much of it is unconscious. Your unconscious won’t even let you see ideas that involve painful schleps. That’s schlep blindness.

Paul Graham knows what he writes about. He’s a startup veteran, successful, and still investing. For a great reading list on startups, try the list of Paul Graham’s essays.