I rarely post about politics or current affairs on this blog but today I can’t resist. Yesterday I read a column in the Wall Street Journal highlighting how a group of religious fanatics, all ethnically Arabs, threatens our country. And last month Arizona enacted a law that openly discriminates against Hispanics. Rationalizations run rampant. It seems like we’re prepared to stomp on minorities, Constitutional or not, equal protection or not, as long as we can rationalize. Pakistanis might be terrorists. Mexicans might be illegal immigrants. 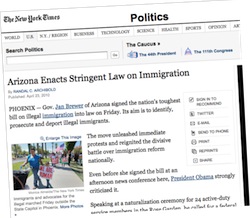 Excuse me, but what are we protecting here? Is it a set of ideals? A way of life? Maybe a Constitution, and a Bill of Rights? So is it okay, as long as we have a rationalization, to squash whole ethnic groups in this country? Citizens or not?

I hate the new Arizona law. It has police and other public officials checking citizenship papers during routine interactions, like traffic stops. So I go to Arizona and I’m fine, because I’m an old white guy; but my Mexican friend, just as American as I am, has to carry extra documentation. All the Hispanic-looking Americans living in Arizona have to carry extra documentation around, just in case.

Isn’t this a lot like what Nazi Germany did to Jews in the early 1930s, first requiring them to carry extra papers around, then later the yellow stars, and, sadly, the horrors that followed. Whatever the problems this Arizona law supposedly solves, it’s just plain unacceptable.

I relate the Arizona law to the terrorism problems because of the way rationalizations for racism grow. And how easy is it to crack down on ethnically Arab people now that we have the problem of religious fanatics who tend to be Arab? It’s already happening. Ask your Arab friends how they feel when they go to the airport. Is it racist? No, they say, it’s just logistics, law of averages, and all. But we didn’t crack down on rednecks when Timothy McVeigh bombed Oklahoma City. And we’re not cracking down on illegal immigrants who don’t look Hispanic.

Sure there are rationalizations. There are always rationalizations. Terrorism, illegal immigration, those are real problems. But however serious those problems are, this country doesn’t solve them by ranking and categorizing and downgrading some of its citizens. That’s not what we’re about. Do the ends justify the means?

There are always rationalizations for racism. They don’t make it okay.