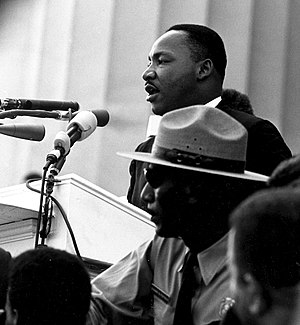 How do you measure great leadership? Inspiring people? Changing the world? Remaining true to oneself while fighting for larger truth? Eloquence? Honesty? Power?

However you measure it, Martin Luther King was a great leader. He was courageous, inspirational, eloquent, and amazingly effective. He changed the world while standing for right against wrong, not letting the end justify the means, not compromising some values for others, meaning great honesty. And he had huge impact on the Civil Rights Movement that changed the legal trappings around racism in this country during the 1960s. That’s great leadership.

A somewhat-paranoid conspiracy-theory-advocate of mine believed the so-called military-industrial establishment had to kill Martin Luther King because, like Mahatma Gandhi a generation earlier and halfway across the world, he led with non violence so effectively that violence, political power, and military power couldn’t defeat him. I don’t buy the conspiracy theory but I did witness how what he started became a movement, and the movement changed the world.

You’d have to be my age – baby boomer age – to remember how bad things were, back then, with racism and bigotry. Nowadays you see images of it in drama and history. The post-war industrial boom society, the 1950s and early 1960s, was openly racist, bigoted, homophobic, and chauvinistic.

Sure, racism and bigotry continue, unfortunately. But when Martin Luther King started his movement, schools all over the South and in most of the cities routinely separated races. “Whites only” establishments, even “whites only” drinking fountains in public places, were common all over the South. I’m not saying these problems are solved, but at least most open public brazen manifestations of racism and bigotry are illegal. And for that we all owe a debt to Dr. Martin Luther King.

And remembering him, on this day, is also a good time to reflect on what leadership really is. It isn’t managing or manipulating public opinion, or spin, or votes. It’s not counting followers, or influence.  It’s standing for ideals and sharing a vision that makes people better. It’s living the values you hold and teaching by example. It’s changing your world for the better by spreading ideas and values.