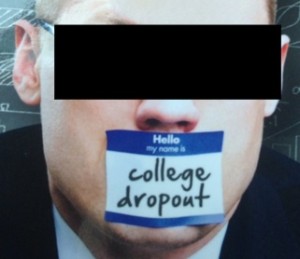 I was writing an email to these folks and I just stopped and deleted the draft. Why waste the time raising entrepreneurs I don’t even know.

My complaint? I got to my office this morning after a few weeks elsewhere and found the results of a concentrated campaign for me to write about a certain entrepreneur and his startup. He’s all about how he’s so successful as a college dropout. I have one package containing a coffee mug with chocolate drops, and another with a copy of his book. Both contain a personalized letter from him, with what looks like a signature. Both contain business cards that are ‘sort of’ from him, but not exactly. And the only contact info I get is an impersonal email address info@[company omitted].

So, let’s get this straight: You want me to write about you, but you don’t even give me your email address? Is that just me, or is it insulting?

I connected this to multiple emails from somebody in his company, pitching me talking to him or interviewing him, also without including his email address. I’d say WTF, but I’m more mild mannered than that, so only WTH.

One thing is all the reasons like you or the next person or anybody else had to drop out of college — too bad, but common enough, and nothing for me to judge — but quite another is purposely building your entrepreneurship pitch around you having dropped out of college. Yeah, sure, Bill Gates, Steve Jobs, and Mark Zuckerberg, I know. But none of them ever made that his secret sauce; the college dropout thing just happened. Bill Gates regrets dropping out of college. Steve Jobs hung around Reed College for the education, even after he dropped out. And Zuckerberg? OK he had a tiger by the tail, who can blame him?  But does he go around bragging about it?

Sadly, formal education becomes a luxury for some. I wish it were available for all. But I’m sure anybody who can get an education is better off with it than without it. And that goes for entrepreneurs too. No, you don’t learn to be an entrepreneur in courses. But what you do learn doesn’t hurt. And there’s a whole life outside of business.