[Ed note. I posted this earlier today on the Huffington Post. I am cross posting here as a courtesy to my blog subscribers. ]

My favorite business story today is Whole Foods CEO John Mackey “pseudonymously” bad mouthing Wild Oats in Web stock forums, presumably to lower the acquisition price for his company. While the serious CEO misbehavior is interesting — and I assume at least unethical, if not illegal — the deeper meaning is how the magic of pseudonymity threatens to make what we now call social media look more like anti-social media. Somewhere in the much-heralded “wisdom of crowds” idea is the problem of false faces manipulating those crowds.

Pseudonymity is indeed a wonderful word, nastiness hidden in literary mystique. It reminds me of great writers who wrote “pseudonymously”, including Samual Clemens (as Mark Twain) and Mary Evans (as George Eliot), and it sounds so much better than anonymity, dark and threatening, like the “man in the trench coat” my mother warned us about 50 years ago. It doesn’t sound like a pedophile lurking in a chat site, although you could say he was acting pseudonymously. Aren’t we really talking about what we used to call the “poison pen letter,” which Wikipedia relates to hate mail, chain letter, and stalking? 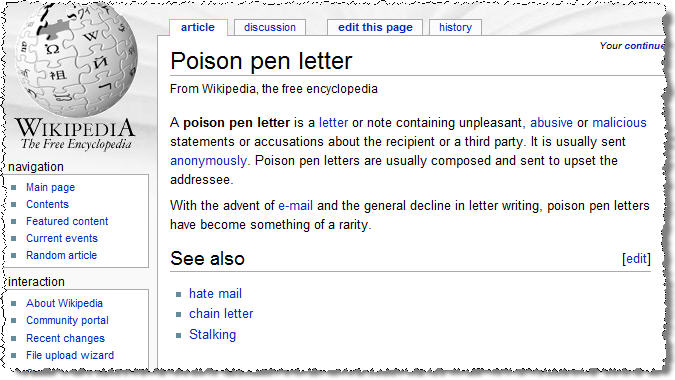 In this case, we have more than just anonymous misbehavior and bad manners. We have a CEO using fake identity to malign a publicly-traded stock, one which his company was trying to buy. I’m not an attorney but I think that manipulating information that affects stock prices is illegal in this country. Maybe not, because there doesn’t seem to be any public statements to that affect. And if not illegal, it can’t be ethical.

Here’s an irony: Mackey signs a statement last month complaining about the SEC dragging its feet on the Wild Oats transaction and promising to be “open and transparent.” Whoops. In the wake of the unmasking of the CEO’s pseudonymous posts, Whole Foods has issued some follow-up statements. Posting is fun, he says, basically; and lots of people do it. Those were his opinions, and what’s wrong with that, he asks (or Whole Foods asks in his name)?

CEO behavior notwithstanding, what I worry about is how this points out a pitfall that threatens the value of the Web’s brave new world of interaction. At the core, we have the wisdom of crowds and wikinomics, both of which assume somehow that lots of people operating together can create real value as a compilation of multiple views. The poster child is Wikipedia itself, where anybody and everybody is an expert. Some research indicates that Wikipedia is on average as accurate as the Encyclopedia Britannica. That’s not going to be true, however, when the crowds include people grinding their commercial axes. Even Wikipedia itself restricts postings to control commercial misuse. Try posting your own biography or your company as a Wikipedia entry and you’ll see it either never appear or disappear.

Not that this problem is new to social media. The arrival of email into the mainstream world, during the 1990s, raised the poison pen letter to new heights of productivity and power. That was followed by tools and tricks to make email anonymous. Then Amazon.com started posting user reviews, leading to new problems that James Marcus chronicled in a 2004 piece in the Washington Post. What about authors reviewing their own books, or companies reviewing the books they’ve published? What about authors or companies slamming their competition?

The pseudonymity problem is already all over Amazon.com reviews and its five-star rating system. What a great idea, I thought originally, to have customer reviews that let me see the voice of the people as I buy. Although the Amazon review system started long before “social media” became trendy, isn’t this the underlying idea? Except that its value is tainted by “pseudonymity.” I was on Amazon this morning and almost bought the five-star iPhone case until I ran into the one-star review with the following quote:

I do not agree with all the “Five Star” Reviews from “Long Beach, California” also the city where the product is being shipped and distributed from. Sounds “Shady” I know. I got suckered. I am requesting a refund. … My buddy wants to use this defected “Made in China” garbage as toy for his dog.

This reviewing world gets murky fast. The slam review is followed by a later reviewer who jumped in with “I don’t know what that guy is talking about, it fits perfect!” Then another reviewer says it doesn’t fit, and yet another answers “I don’t know about all the reviews saying it doesn’t fit.” Which of these are honest, and which are tainted? Are the positives just the manufacturer, and the negatives competitors? If you explore the reviews, not just in Amazon but in just about any site that offers user reviews, you’ll see some that divide obviously into manufacturers vs. competitors. And there are lots of reviewers slamming other reviewers. “Don’t believe so-in-so who said …” is all over product review sites.  No wonder Amazon encourages using your real name with a “real name” badge on the review.

The hosts of all this, meanwhile, the amazon.com management and their counterparts in other sites, have a real dilemma. If they mess with reviews then they become responsible for reviews’ content, but if they don’t mess with them, well, I think that’s what we actually have. It’s not a trivial problem, because we have business motivations messing with the classic wisdom of the crowds, making a mockery of the whole idea of wikinomics and social media.

The blog world is right in the middle of a pseudonymity crisis, today. People are buying and selling blog comments and favorable product reviews in blogs. People are posting sloppy, deceptive copies tagged to maximize the ad revenue from the ads around them. There are software packages designed solely to help bloggers block comment spam that assaults popular blogs as would-be comments done by software, not people, plugging products. Some bloggers use pseudonyms to plug themselves in social media tagging sites like Digg and StumbleUpon.

Ultimately, as with Mackey, other people influencing stock prices, and the companies plugging their own products and knocking competitors in review sites and blogs, there’s no good answer to the problem of social media distorted by commercial goals. Let the reader and believer beware. The hosting sites are in a legal bind. Savvy users are starting to catch the more obvious attempts, but the practice of pseudonymity is, like Mackey said in his own defense, what everybody is doing.

And I don’t like it. I’m sorry that spam has made email less useful, and that was the start of it. Unfortunately, the power of the Web to multiply the efforts of millions is also built into millions of different ways to hide comfortably in pseudonymity and pursue commercial interest. What seems like social media is apparently sometimes anti-social media.