Proving Again that Business Ideas Have no Value

Hold a mirror up to a mirror, and you get some kind of representation of infinity, or something like infinity, intriguing but hard to explain. Just do it.

That’s something like what happened to me yesterday with a riff on business ideas. It started with my first view ideaswatch.com, which is a new website where people can suggest, list, and discuss new business ideas. Think of things you want. Things you wish existed. Those are business ideas.

I love it for several reasons: new business ideas are fun; they’re not owned so they shouldn’t be hoarded; they stimulate entrepreneurs; and the site seems well done. And this reinforces my own insistence that too many people overvalue business ideas; that an idea without implementation is just an idea, worth nothing. So why not share?

But it gets better. I clicked onto the site and started browsing the ideas already posted, and I found this one, called “Startup Failures.” Just to make it clear, the image here isn’t the main page. It’s a specific idea, one of hundreds posted on the site. 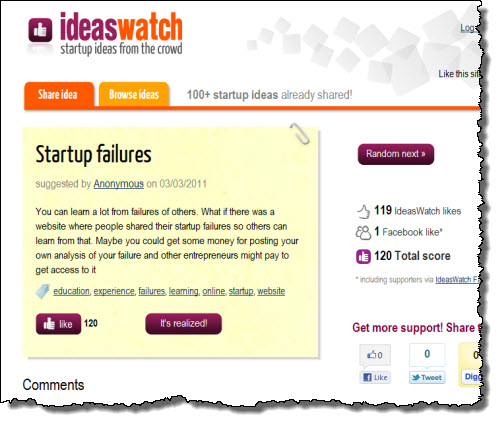 In case you can’t read the fine print, the idea is:

What if there was a website where people shared their startup failures so others can learn from that.

Which is where we start ruminating on the nature of ideas, and how nobody really owns an idea. Because:

So we have a cool site encouraging people to post and discuss new ideas, and we have a new idea I found there, that’s a good idea, that I’d like to see exist. And we see here that, like all cool ideas, it’s already percolating. It’s out there.

And whoever makes it work deserves to make the money. If you, for example, take this and make money on it, then you and nobody else deserves the money. The value is building the business, not having the idea.

0 responses to “Proving Again that Business Ideas Have no Value”