The New JOBS Act, Crowdfunding, and Shoes Waiting to Drop

It’s less than three weeks since the new JOBS act opened the door to exciting new crowdfunding initiatives. This could be a sweeping change, an end to antiquated laws requiring startups to get investment mainly from so-called accredited investors. And it could be another deregulation causing a lot more problems than it solves. 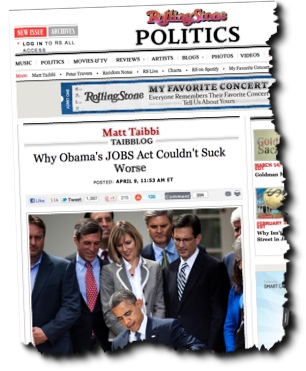 I could go on with the reading list, but it’s already too long.

So which is it? All hail the new era of startups let loose from the nasty bureaucratic constraints? Or the opposite, run for the hills because chaos is coming? Obviously somewhere in between the two. Also obviously, a lot will depend on who does what in crowdfunding, and how quickly, and how well. If this new world starts with some very visible unsuccessful but popular deals, for which a lot of people lose money, that’s one scenario. If the regulations manage to control the scams and somebody builds a good crowdfunding site with some reasonable precautions, then that’s another scenario.

So I’m waiting for that the shoe to drop.