Yesterday my sister sent me the link to Why Men Need Women, a New York Times opinion piece by Adam Grant. This morning one of my daughters sent it. It starts with this: 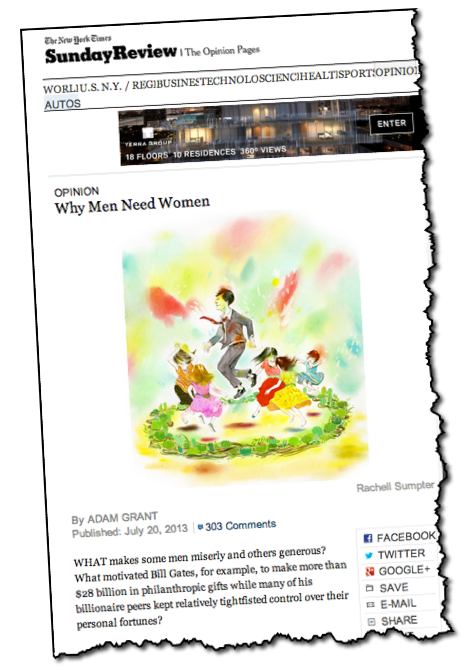 New evidence reveals a surprising answer. The mere presence of female family members — even infants — can be enough to nudge men in the generous direction.

Grant, a professor at the Wharton business school, cites a collection of interesting studies where researchers drilled down into details, discovering:

Grant, a popular prof at Wharton, also the author of Give and Take, draws some logical conclusions about gender balance in school and workplace:

What would happen if every classroom followed the jigsaw structure, with mixed-gender study groups providing boys with the opportunity to learn from girls? In addition to gaining knowledge, perhaps they would learn something about teaching, helping and caring for others.

At work, we sorely need more women in leadership positions. We already know from considerable research that companies are better off when they have more women in top management roles, especially when it comes to innovation. Professors Dezso and Ross have recently shown that between 1992 and 2006, when companies introduced women onto their top management teams, they generated an average of 1 percent more economic value, which typically meant more than $40 million.

We recognize the direct advantages that women as leaders bring to the table, which often include diverse perspectives, collaborative styles, dedication to mentoring and keen understanding of female employees and customers. But we’ve largely overlooked the beneficial effects that women have on the men around them. Is it possible that when women join top management teams, they encourage male colleagues to treat employees more generously and to share knowledge more freely? Increases in motivation, cooperation, and innovation in companies may be fueled not only by the direct actions of female leaders, but also by their influence on male leaders.