Oxford is a beautiful university center about 90 minutes from London. London is an enormous city. This is the old world, stone buildings, thousands of years of history and traditions. Piccadilly, trains that run often and on time, with stations named Paddington, Victoria, and Waterloo.

Today I had a meeting with Heriberto Cuanalo, chairman of Innovateur Ltd, who is living a new world life in an old world geography. Heriberto lives outside of Oxford, in the English countryside, much closer to one of the world’s great university centers than to one of the world’s great cities. He breathes fresh air and wakes up to green of landscape and gray of sky, rather than the various shades of city gray.

He met today with me and Alan Gleeson, UK managing director of Palo Alto Software Ltd, in a pleasant lounge area in a hotel lobby in Paddington station, here in London. To do that and live comfortably outside London, all he had to do was drive to a nearby train station and take a train, less than an hour, into the city. 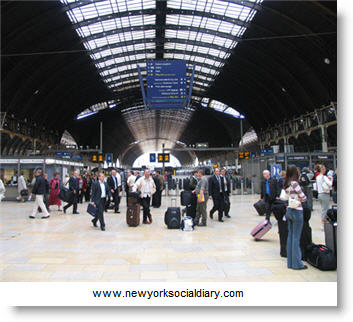 We met for an hour, had a good discussion, and as we parted, Heriberto headed back to the next train. They run every 10 or 20 minutes or so. They’re clean, and they’re on time. He was back home in the Oxford countryside in about the same amount of time that it took me to get through the London tube to my hotel.

You might not be impressed with that combination of new world lifestyle in the old world.  Maybe you live in one of the other world cities that are properly connected with trains and buses and such, making such a compromise possible. I know people who live a train’s ride away from New York, they have that possibility.

I, however, live on the West Coast, where we depend on cars. When I have a meeting in Portland I have to drive two hours, park, and then drive back. There is a train, but it runs only three times a day, it’s often late, and it takes three hours or more, not just two hours. I also lived many years in Mexico City, where mass transit is overwhelmed by urban crowding, and in Palo Alto, CA, where trains work fairly well only if you happen to be going from a place that has them to a place that has them, which doesn’t happen that often.

I’ve long admired Doug Hancock, IP attorney, who lives in a beautiful mountain area of  Central Oregon but keeps a law practice in Portland, mainly by working remotely. I wonder how much he’d like to be able to hop a train and get to Portland in an hour.

It is ironic to me that something as old fashioned as well maintained feeder trains and comfortable buses that run on regular schedules with short intervals between departures can be the key to living a new world life in an old world. The urban centers of the world are choking on traffic and fuel waste and the incredible loss of time involved in moving people from suburb to suburb. As I was growing up in suburban California in the 1950s and 1960s, planners were already saying that the growth of automobile-centric cities was impossible. And some of the old world cities had a reasonable solution all the time.