Today I remember my literature classes, and my background as a one-person business, all at once, with the T.S. Eliot quote:

April is the cruelest month. 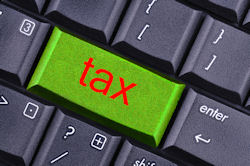 In the old days, the first 15 years or so of my being in business on my own, the phrase “Schedule C” struck at my heart like a cold poison dagger.

Schedule C, and the April 15 deadline, was to me roughly equivalent to what the gallows was to the old-time cattle rustler stuck in jail in the pioneer town waiting to be hung. I remember the growing panic as the day approached, trying to figure out how I would round up enough money to pay the government what I owed. The run-up to the deadline was like the construction of the gallows.

I’d put it off out of shear dread. It wasn’t just the paperwork, the cold hard finality of it; it was that you had to actually have the money. Like so many of us in entrepreneurship, I’d always known I was supposed to put away a substantial portion of my consulting billing to hold for taxes; but the kids needed shoes, the mortgage needed paying, so we’d spend and hope for some last-minute payment to help us out.

For those of you who don’t quake in horror at the mention of the word, Schedule C is the part of the 1040 IRS tax forms which the self-employed use to report their sales and expenses for the year, and add up the taxes owed.

I made a pretty good living as a business plan consultant. I billed a nice amount of money every year. The problem was keeping that reserve.

I would read the tax forms again, every year, hoping that the postponement to June 15 would give me a reprieve. No luck. You can put off the filing of the forms, but you have to send in the check.

I would always drive to the post office with my forms and my check after 11 p.m., and join the line with the other fools and procrastinators who waited until the last minute. Cheery post office employees would stand at the curb, in a festive mood, as the drivers passed by and dropped their envelopes.

Yes, I know, I was supposed to be doing estimated payments every quarter, but this was the olden days, there was never enough time or money.

So, to those of you still suffering that, my heart goes out to you. It sucks. I hope you end up like I am now, with somebody organized in the financial management of the company I own helping me make sure I’m all paid up in advance, and somebody else filling in the forms. What a relief.