I was happy to discover major media dose of reality in Maybe It’s Time For Plan C in yesterday’s NYTimes.com. While it’s so much more popular to talk about entrepreneurship as a matter of passion and persistence and living the dream, I think it’s also important to recognize that failure is common, and failure can be miserable. 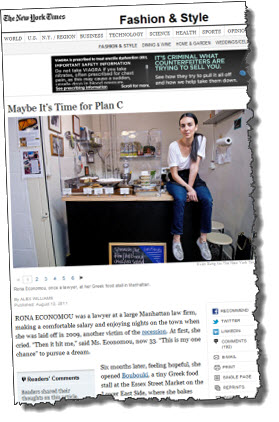 The Plan C in the title is a reference to Plan B as people moving out of their corporate jobs to start there own business.  Alex Williams sets the scene with the glamor of the post-recession entrepreneur:

In recent years, a wave of white-collar professionals has seized on a moribund job market, a swelling enthusiasm for all things artisanal and the growing sense that work should have meaning to cut ties with the corporate grind and chase second careers as chocolatiers, bed-and-breakfast proprietors and organic farmers.

Indeed, since the dawn of the Great Recession, more Americans have started businesses 565,000 of them a month in 2010 than at any period in the last decade and a half, according to the Kauffman Foundation, which tracks statistics on entrepreneurship in the United States.

The lures are obvious: freedom, fulfillment. The highs can be high.

And if you pause to reflect, there’s a whole lot of that new entrepreneurship going on. And I’m all in favor. I post a lot about starting your own business in this blog and elsewhere, and I’m a frequent recommender of books like Pamela Slim’s Escape from Cubicle Nation  or Melinda Emerson’s Become Your Own Boss ; not to mention my own book 3 Weeks to Startup . But all of those books temper the optimism with reality and planning. And that’s what Alex adds in the piece yesterday: the other side of the picture.

But career switchers have found that going solo comes with its own pitfalls: a steep learning curve, no security, physical exhaustion and emotional meltdowns. The dream job is a “job” as much as it is a “dream.”

Many are surprised to find the hours and work grueling.

Amen to that. I say yes to those who want to start their own business, but a careful, fully aware yes. Go into it with your eyes open. As this piece in the New York Times concludes:

Plan B, it turns out, is a lot harder than it seems.