Who Speaks for Small Business?

As a small business owner who was once a journalist, when I read Taking Mom And Pop To The Cleaners on the Huffington Post, I think I know how that happens, why it’s bad, and why it’s also unlikely to change. 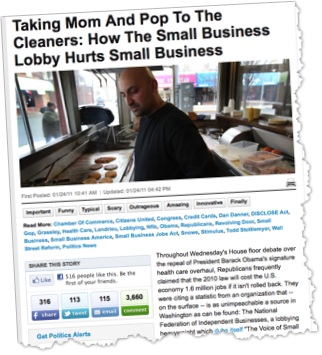 The story is about how the National Federation of Independent Businesses (NFIB), has become the voice of one side of the political spectrum:

… for the past two years, the NFIB has been less an advocate for small businesses than an arm of the Republican Party. When the interests of the GOP and the needs of small firms have collided, the NFIB has repeatedly sided with Republicans, jeopardizing billions of dollars in credit, tax benefits and other federal subsidies that are critical to the small enterprises that form the backbone of the U.S. economy … the NFIB has maintained a lower national profile, and is still routinely referred to in the media as “the small business lobby.”

No group actually knows what small business thinks or wants because small business doesn’t exist as a group. The thing small business owners have most in common is not having very much in common. By definition, they are nonconformists. They did their own thing when they started that business. My anecdotal sense is that they don’t join groups unless they have to. They’re busy. They’re focused on the business. And they are an extremely diverse group.

Journalists, meanwhile, aren’t supposed to have opinions; they have to ask for opinions. And politicians even more so. Therefore, when they look for what small business thinks, they look for a spokesperson. You or I might be that spokesperson, maybe; but then it’s hard to find just anybody; so they go for somebody. And end up with the somebody they called last time. Somebody who sounds like he or she represents small business. And that ends up as NFIB, and the like (see below: the Huffington story, to its credit, also points to groups representing the opposite point of view, like Main Street Alliance)

Nobody’s really to blame for it. It’s just the way it happens.

What annoys me about it is all the people supposedly talking about it are grinding their own political axes. They define what small business wants as constant whining about taxes and regulations and very little else. What about the bigger picture? What about looking up at what the government can do for the economy in general, like regulating the financial chaos, funding education, sponsoring innovation, and hey, maybe just infrastructure, like fibre cable and freeway bridges? Is it bad to protect employees from predatory employer practices? Not to me? Would we be better off with more open policy towards immigration? I think so.

But the journalists are going to ask the groups that turn up first on their speed dials, cell phones, and google searches. Not you and me.

Does anybody care? Well, they had 3,661 comments on that post by this morning. Hmmm …

And I have to make two late additions to this post:

2 responses to “Who Speaks for Small Business?”