Muhammad Ali and Courage of Conviction

Muhammad Ali died last week. Most everybody knows about his having been, vocally, “the greatest.” And he was as great as he claimed, and not just for how much his atheltic talent and hard work, not just for how much he changed an otherwise dreary sport, and not just for his brazen, charismatic, unconventional, and thoroughly charming public persona. He was also great as a voice for conscience, doing what he knew to be right, in the face of very powerful opposition. He was not just a sport star. 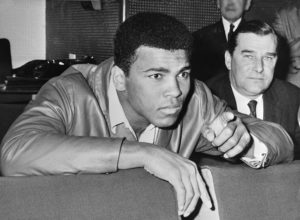 I’d like to help you understand 1964 from the point of view of baby boomers, as we mourn Muhammad Ali. Everything changed so fast. We were in high school. That year started for us with the assassination of President John F. Kennedy just a few weeks earlier, late November of 1963. That was a shattering blow of reality, breaking a peaceful status quo, a trust in every day being like the previous, into tiny pieces. A few short weeks later, in February, we had the Beatles on Ed Sullivan. All year we had the 1964 presidential election, the Lyndon Johnson campaign Democrats pushing the Great Society and Vietnam War, and the Barry Goldwater campaign promising us nuclear war. By the fall we had Mario Savio at Berkeley and the free speech movement. The civil rights movement awakened, with Martin Luther King channeling Mahatma Gandhi and the power of non violence and peaceful protest. The whole world was cascading towards a new world order of psychedelic music, civil rights, protest, long hair, and what felt, especially to us teenagers, like a crusty entrenches establishment falling apart and being replaced by a vibrant new power of truth and real freedom.

Imagine how this felt to teenagers in high school. We were dealing with the growing up, hormones, and such that all teenagers have, but in our case laced, as if it had been LSD, with a sparkling optimism as bright and inviting as a clear mountain morning. Everything felt like a black-and-white world going suddenly into color. I turned 16 six weeks after the Kennedy assassination, three weeks before the Beatles arrived. Was it crisis, or gloom? No. When you’re that age, change is the goal, not the worry. 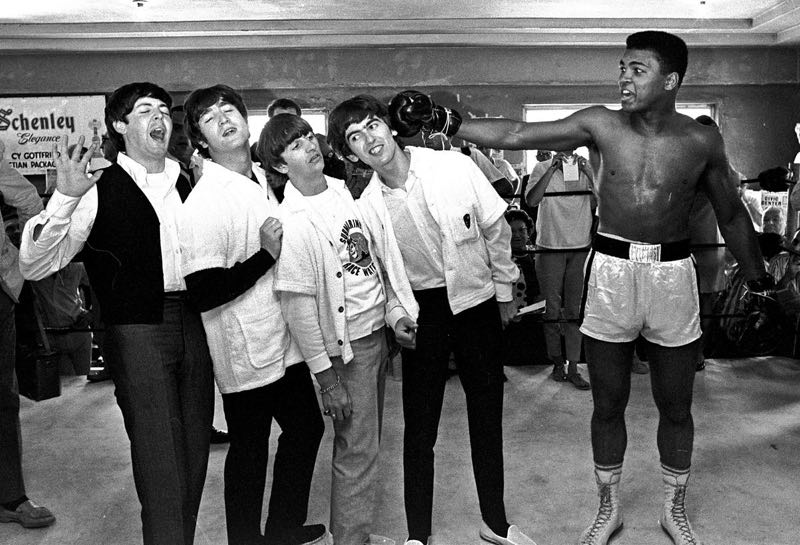 Where I was, an unremarkable nice suburb outside of San Francisco, as homogenous as white bread and whole milk, we knew the name Cassius Clay early in 1964 only vaguely as a charmingly vocal and self-assured Kentucky kid who had won a gold medal in boxing in the 1960s. It was in the same month that the Beatles arrived in New York that he became the greatest Cinderella story in the history of boxing, a tall, thin, lightning-fast 22-year-old kid defeating heavyweight boxing champion Sonny Liston. Had it not been for his remarkable, instinctive media magic, perhaps nobody would have noticed. But Cassius Clay loved interviewers and they loved him back, and so we became aware of boxing. He had not even a snowball’s chance in hell to defeat the powerful, burly, undisputed champion. Until he did. And resoundingly, too. There was no doubt. The kid trounced the champ so badly that when the bell rang in the sixth round, Sonny Liston gave up. He refused to come back out. And then, despite everything else (the Beatles tour) going on, suddenly everybody followed boxing.

And then, with a one-two punch to rival his lightning-quick boxing style, Muhammad Ali announced to the world that he was not Cassius Clay anymore. He changed his name to Muhammad Ali. He had decided to follow the Nation of Islam movement, a matter of religion, mixed with black pride, and immersed in the 1960s struggles against overt and endemic racism. Doing that publicly, without equivocation, cost him something in the order of $10 million dollars. It got him locked out of boxing for several years, and, eventually, sentenced to five years in prison for draft evasion. He remained free pending appeals that went eventually to the Supreme Court, which decided in his favor. But he lost his title, and his boxing license, and went from world champion to four years waiting in the wings, unable to fight.

That took courage. He went instantly from everybody’s hero to anathema, reviled by the main stream. The nation was still struggling to pass the Johnson civil rights laws, and much of the nation was struggling, violently, without shame, to maintain a racist status quo. Governor George Wallace of Alabama, openly racist, ran against Lyndon Johnson in the Democratic primaries in 1964, and got votes. The police riots in Selma AL were early in 1965. Civil rights workers were murdered, and sit-in were broken up with clubs and tear gas. And the U.S. was at war in Vietnam, filled with the cries of “my country – love it or leave it.” But Muhammed Ali stuck it out. Courage is the active word when it takes risk, and sacrifice, to do the right thing.

The mainstream people did, later, recognize Ali’s integrity. He was invited to the White House several times. 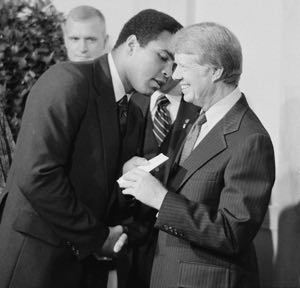 I don’t like boxing. I had almost accidentally seen some of the best of it, when I covered two world championship fights from ringside, as a journalist, back in the 1970s. Muhammed Ali changed that for a whole generation, for a while. After the spectacular original upset, he defended his championship for years, was locked out of boxing for years, and then came back to win his championship again and defend it several times. His personal charisma and his obvious (even to the uninitiated) skill, a new light of foot and quick style, made boxing palatable for a while.

But it wasn’t his boxing that made him great. It was his courage and integrity. I honor his memory.