A 1990s study cited “inadequate sales“ as the most common cause of business failure, followed by “competitive weakness.”  This ties neatly into Marc Andreessen’s statement that Market is really the thing that matters, which is the key to his fourth post on startups on his blog.pmarca.com.   He talks about the different main factors of team, product, and market, but concludes that market is what really matters most. Or, better yet, “product-market fit.”  That’s a great summary.

Business owners blamed inadequate sales in 39% of failures, and competitive weakness in 20%.  Both of these are related to Andreessen’s idea of product-market fit, or in the case of failure, the lack of it.  Of course the finance people cite cash flow, and as a business planner I’m supposed to cite business planning, but I admit it, strong demand covers a lot of other weaknesses.  You can screw up your plan and still succeed if everybody wants what you’re selling. 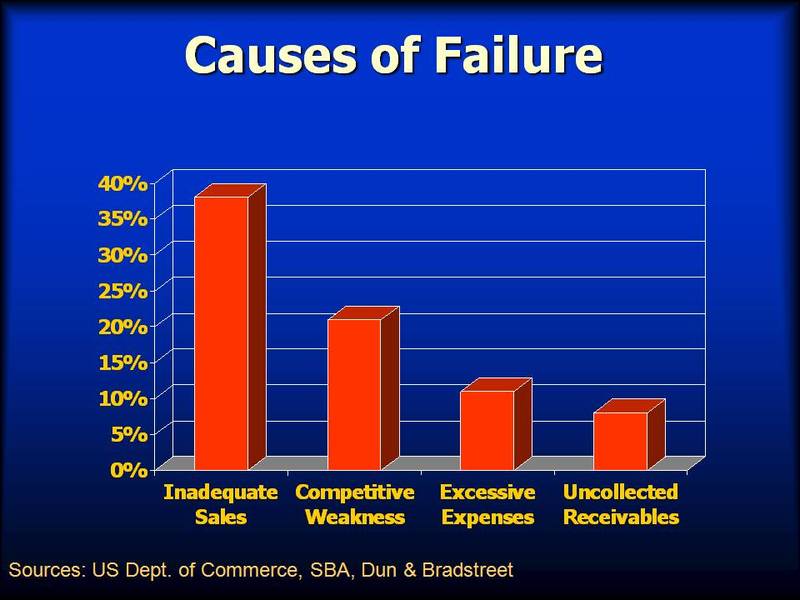 Doesn’t this also validate the idea that the second or third entry into a market is often the most successful? I’ve many times dealt with entrepreneurs who insisted they had to be first, or, the corollary, were devastated because somebody else launched their idea before they did. This doesn’t mean you won’t win. Apple was the third personal computer company, not the first.  Neither Facebook nor MySpace came first (remember Friendster?). Google was hardly the first search engine.

What you do have in that case, as the second or third entry, is a better shot at accurately finding that product-market fit.  You get to exploit the market, and you don’t have to make it first.  And, of course, you don’t run the risk that you don’t make it, you just run out of money.  In which case, the financial analysts blame poor cash flow, and the business planners blame poor planning.  Not me though, I’m with Andreessen.  The underlying problem is that not enough people wanted to buy what you were selling.

And from my experience, much as I advocate the need for planning (process, not just the plan), there is nothing like the power of real market demand.  I watched it from close-up as Borland brought out Turbo Pascal first, and then Sidekick.  Management team, business plans, all great, but nothing like market demand.  I saw it again from close hand when Apple brought out the Macintosh.  And I expect we’re going to see it later this week as Apple launches the iPhone.