Making it With the Mac

So I posted Back to the Mac here in January when I put a gorgeous new 24″ iMac on my main desk top at home, replacing my Windows XP Media machine that got sent upstairs to serve the television (which we haven’t used much since). The initial view was exciting, but I was missing a couple key items.

Six weeks later, I’m really happy with the switch. I don’t know how much of the screen capture you can see in the low blog resolution of 450 pixels, but the illustration here is my Mac working happily in Windows Live Writer composing this post. Live Writer is completely integrated through Parallels, in what they call coherence mode, so it’s just like another Mac application. I can copy easily from Firefox to Live Writer and back. Thanks to Noah Parsons for that. Noah also helped me get an additional two gigabytes of RAM and plug them into the bottom of the monitor (which is actually the computer) and that helped too. More memory made a big difference.

And then I did a quick google to discover that screen capture is built into the Mac. I know, it’s in Windows too, but this is a more powerful screen capture. I added Acorn to edit and manage them a bit, and solved that problem too.

Now my only problem is I’m starting to think about how nice it would be to have something like this on my main desk top at work. And I don’t really, strictly speaking, need it … but it is very tempting. 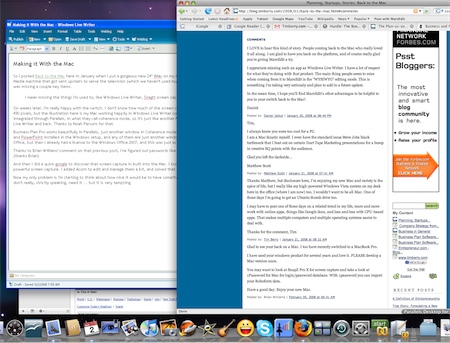