I love twitter. What blogging is to email, Twitter is to instant messaging (IM) … and then some. You can follow me on Twitter as Timberry. I’m like a fish with a shiny new thing. And, with due respect to the MSNBC line (if you don’t get it, you’re too old) — I’m 61. But that’s nothing: my 89-year-old dad is on Twitter too.

Consider this picture of Twitter usage published earlier this month on TechCrunch: 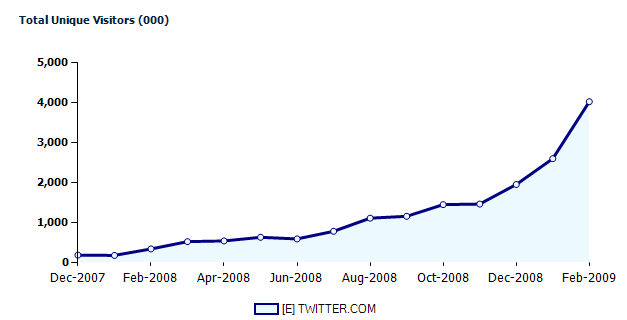 But first, some vocabulary (just to get it straight): Twitter is web publishing in 140-character snippets. A tweet is one of those snippets. To tweet means typing those snippets into Twitter. To follow is what you do (takes a click) to get access to somebody’s tweets. A follower is somebody who follows you. To retweet means to take somebody else’s tweet and tweet it again, giving them credit, to your followers. Your followers can also be called tweeps, or sometimes tweeple.

Is it all too cute? Avoid the now-famous Stephen Colbert gaffe with the wrong verb.

About Twitter backlash. The Daily Show take on it, Samantha Bee ignoring the interview while peering into a cellphone keyboard, was hilarious. The Twitter Facebook users accuse it of twitterizing itself.  The Google search for “twitter bashing” turns up half a million hits. “I hate Twitter” is good for more than 18 million.

So here are some good reasons to hate Twitter:

Consider this an enthusiastic hooray for relationships in 140-character snippets. Crazy as this sounds, ironic indeed, but some of my Twitter friends feel like real friends to me. When they tweet their latest blog posts, I go, I read, I comment. When I tweet my latest blog posts, they go, read, and comment. They recommend me to others. I recommend them. I ask for recommendations, they respond. Sometimes it’s just “I liked your last blog post” and sometimes it’s “does anybody know a restaurant in Portland that does Thanksgiving dinner?”

I blog a lot these days. I care about other people in the same general topic areas. It’s nice to follow them on Twitter.

So, then here are some good reasons to love Twitter:

Seems like almost everybody on Twitter is a social media marketing expert offering to show the rare non-social-media-marketing experts how to make money on Twitter. Seems that Twitter can be good for people in the expert business. But is it good for business? Or, the question of the last month or so, are you an idiot if you’re in business and not in Twitter?

Twitter is no more good or bad for business than telephones, letters, conversations, or pies in the face. The medium isn’t the message; the message is the message. I have lots of twitter friends who are straight, like it, keep in touch with it, and — lo and behold — that’s good for their business. But is being in Twitter good for business? Nope.

I can’t figure out Twitter and relationships. It’s oxymoronic, and, sometimes, just plain moronic. But it brings me closer to blogging and Web people I like and respect. Paradox, I suppose.

At its best, it really is writing, and a new kind of self publishing. For evidence, I call on David Petheric (clarocada on Twitter) and his post Top Tweets of 2008 on DigitalBiographer.com. He gets the credit for the collection, and I’m choosing just a few:

There: see what I mean? Good stuff. It reminds me of something that came over the teletype 38 years ago when I was on the night desk at UPI in Mexico City. Rumor had it he put this onto the service and walked out for good. His tweet, 38 years ahead of its time, was:

“Too much work, too little money. I quit.”

And, what the heck, my favorite tweet from my 900-some tweets:

I felt poetic that day.

Conclusion: a quote from an NBC web story about twitter:

The nicest thing about Twitter might be that it’s a grassroots medium nobody has quite figured out a way to make money off of yet. Not even the guys who created it.

0 responses to “Loving and Hating Twitter, in 5 Easy Pieces”