Accents, real speech, figures of speech, colorful speech. Expressions. The way we use language fascinates me. I wonder if technology changes it? 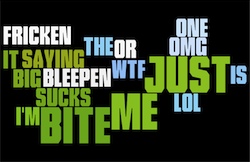 And also, some simple observations, about language in my lifetime, and how it’s been changing.