While I don’t normally post about movies, I caught Lions for Lambs on a recent plane flight and I’d heard so little about it, and it was so good, that I want to recommend it here. 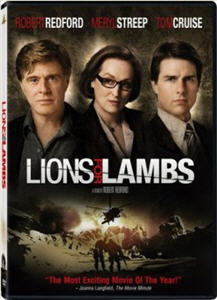 This is a thoughtful, very well developed, but also entertaining movie that asks — asks, but doesn’t answer — important questions about war, politics, and education, against the background of the war in the Middle East.

It jumps between three simultaneously playing scenes: a professor (Robert Redford) and a student; a senator (Tom Cruise) and a journalist (Meryl Streep); and a war scene in Afghanistan. All three are related.

What’s most interesting about it is the sense I get of balance, meaning not being heavy handed about taking sides. It’s all about important issues. It will make you think.