Let's All Change the Word Entrepreneur To Empresario

On Monday my friend Robert Jones of Penpoint Group posted 5 reasons we need a new word for entrepreneurs. They were: 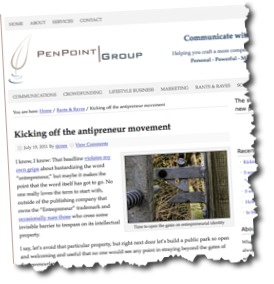 The first four are enough for me. I’m ignoring that fifth point because I write for Entrepreneur.com and Entrepreneur Press published my last two books. I like the people there.

So we need a new name for entrepreneur.

Robert suggested venturist on Monday. I commented that it wasn’t catchy enough. Then he suggested venturer in his next post, yesterday, called Kicking Off the Antipreneur Movement. He adds:

I would argue for a term that’s as broad and inclusive as possible. Language adoption relies on usage, and you don’t gain users by excluding people. The best term is one that encompasses all the different varieties of those we currently call ‘entrepreneurs’ — founders and buyers, tinkerers and turnaround artists, profit seekers and social visionaries.
With all those criteria in mind, I wonder if ‘venturer’ might be the term we’re looking for.

And that’s why I like empresario. It’s Spanish, from empresa, which means company. And we’re all getting very familiar with lots of Spanish words that become common in American English. And empresario is easy and fun to say, easy to spell, and, in my opinion, kind of cool.

But it won’t work unless everybody does it. Robert suggested we start using the hashtag #venturer on Twitter instead of #entrepreneur. I think #empresario is even better. What do you think?