It’s Analytes Vs. Justdoers in a Battle to Business Death

In a darkened arena with a spotlight on a fighting ring in the middle, the crowd hushes as an announcer walks to the middle of the ring and announces the next battle. 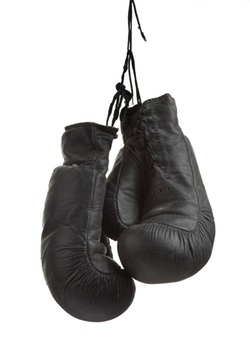 “In this corner…” — his voice echoes through the arena — “… we have the analytes.”

The analytes can’t move without the numbers. They study. They research. In their world, answers are there for the taking, if you just do the numbers hard enough. You resolve uncertainty by looking harder at the data. Every problem has an answer. There is no uncertainty that can’t be resolved by further research. Their critics call it paralysis by analysis.

“And in this corner,” the echoing voice announces, “we have the justdoers.”

The justdoers trust hunches. They want action. For them, it’s all just guessing, so let’s take our best guess and get moving. They don’t worry so much about uncertainty because it’s all uncertainty, and the answer is to guess.

The justdoers drive the analytes crazy. “Come on,” they shout, “what are you waiting for? We’re going to miss the market. Let’s go.” 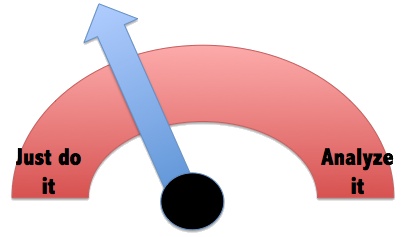 And the analytes drive the justdoers crazy. “That’s irresponsible,” they say, “we haven’t done the research.”

And, unfortunately, never the twain shall meet. I think the happy medium is somewhere in between. Especially with entrepreneurship and small business, I think you have to remind yourself to slow down and educate those guesses … and that you can’t ever study enough to eliminate uncertainty. The past doesn’t predict the future.

This difference in style is really significant. Each of the extremes makes the other extreme very, very nervous. We have the paralyzed vs. the loose cannons.

I’d like to think there’s a medium range in between the two extremes, where people understand that they are guessing, so they educate their guesses with practical research wherever possible, but they take only the right amount of time before taking their best guess and moving forward.

And I’d like to think I’m close to the medium, because I like to absorb the data before I discount it in favor of common sense. I hope the data affects my decisions, but only in a non-specific osmosis sort of way. And when in doubt, I know that it’s all uncertainty, so we might as well get moving.