I completely agree with Steve King of Small Business Labs, in Is the Venture Capital Industry Broken? He says:

The news here isn’t that the VC industry is broken. This has been actively discussed for years. The news is who’s saying it’s broken.

Which is, in the flap this month, the Kauffman Foundation.

The Kauffman Foundation has long been a close friend of the VC industry.  In addition to investing many millions of dollars with VCs, Kauffman’s mission of supporting entrepreneurs and high growth companies has resulted in them closely collaborating with the VC industry.

The foundation recently published We Have Met the Enemy and He is Us, a blistering critique of venture capital and its role in startups.

Here’s the problem in one simple business line chart (why I like business charts). It shows how the rate of return on venture capital looked great during the first big Internet boom. It’s not a pretty picture. 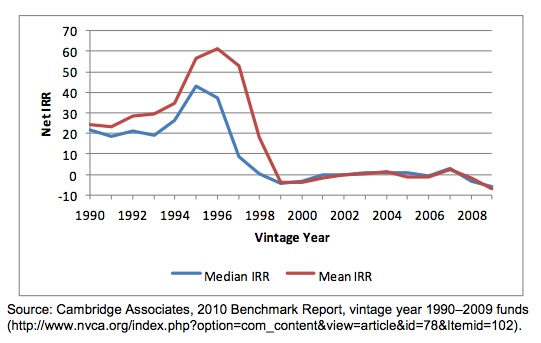 On the other hand, those low points in the last few years aren’t uncommon, are they? How is your industry doing since the great recession? The chart shows pretty much what Steve summarizes as follows:

Kauffman has many reasons why the industry is broken.  But the quick summary is the industry simply hasn’t performed well.  Only 38% of the funds Kauffman invested in over the last couple of decades beat public market small cap indexes.  This is primary due to the expensive fees VC firms charge.

So does this mean hard times for startups? I doubt it. I see is a shift towards smaller seed rounds and more angel investment as a web and software technology have reduced the capital needed by the average high-end web startup to get from nowhere to proof of concept and validation. In an oversimplified general sense, what took $2.5 million in 1998 takes probably $250,000 today.

Steve recommends this story in GigaOm and this one by Fred Wilson of AVC for further reflections on the Kauffman findings.