Is It Hooray for Social Media or Goodbye to Privacy or Both?

Speaking of paradox and contradictions (as I did with my post here last month), how about the good news/bad news mess of mixed-up emotions with the increasing personalization of advertising. 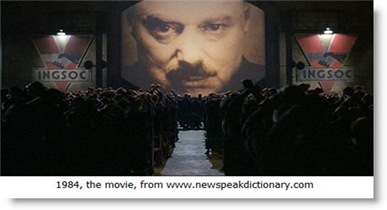 The good news (well, sort of) is less of the traditional shouting and interrupting types of advertising we all grew up with. Nobody really likes the ads that interrupt the flow of television and radio shows. We tolerate ads where we can just not click, or turn the page.

I’d like to think that this is happening because of the gradual growth of the business impact of social media and similar phenomena, in which word of mouth multiplies organically, replacing advertising with relationships and authenticity. That seems like a relatively pleasant scenario.

The bad news is more of the personalization that smacks a bit of 1984 and Big Brother and paranoia. This is what the New York Times called Ads Follow Web Users, and Get Deeply Personal:

“The result is a sea change in the way consumers encounter the Web. Not only will people see customized advertising, they will see different versions of Web sites from other consumers and even receive different discount offers while shopping — all based on information from their offline history. Two women in adjoining offices could go to the same cosmetic site, but one might see a $300 Missoni perfume, the other the house-brand lipstick on sale for $2.”

I have mixed feelings about privacy, particularly when it’s “Privacy” as political motivator and campaign slogan. I’ve seen it used as justification for all kinds of crazy ideas, such as somebody ringing my phone in my house being able to block caller ID (if you don’t want to be identified when you intrude, don’t intrude. Seems simple to me). By the way, have you asked yourself the relationship between privacy and authenticity? In social media?

And this 1984 queasy feeling… does it still hold when it’s not an evil government controlling thought, but a cosmetics vendor optimizing sales?

Which brings us to the simple discussion of business. Is it good business to customize messages, even business offerings, to match very carefully defined and tracked consumer characteristics?