I was reminded yesterday that sometimes the best financing for an emerging startup is innovative loan financing, from savvy investors, rather than straight investment or commercial borrowing.

The reminder came in an email from an entrepreneur named Terry (not the real name) who included two PowerPoint pitch decks: one for seeking venture capital, the other for a bridge loan. I’d met Terry in person three years ago, after we’d struck up a friendship in Twitter. I was impressed then with the commitment to the new business despite financial woes and family sacrifices of Terry and spouse, a young couple, with a new baby on the way, their first. 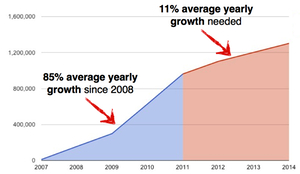 Three years later, Terry’s slides show 85 percent growth in revenues per year, cash flow break even, and a strong management team. Sales will roughly double in 2011. And the company has a convincing growth plan based on expanding into very closely related markets. I’m very impressed. The illustration here is taken from Terry’s deck. You probably can’t read the numbers and years, but it’s showing sales growing to about $1 million since 2007 and a more conservative growth line in the future, but that’s just to show what it would take to repay a proposed loan. My guess is that growth could be much higher than what’s shown here.

Which brings me to the reminder about the loan idea instead of investment. Here’s the situation:

So what does Terry do? Find savvy local investors with a loan package. The loan offers the investors an interest rate several points higher than what they’d get with banks, CDs, or bonds, plus a small share of equity to give them a shot at a share of a big win if there is one, and a much bigger share of equity if the company fails to repay the loan.

This is a very real alternative, can be attractive to both sides, and it actually happens a lot more than what you’d think from reading startup blogs.

My advice to Terry: go to www.gust.com, register your company, post your loan proposal there, and contact the local angel groups you’ll find there among the 600 angel investment groups.