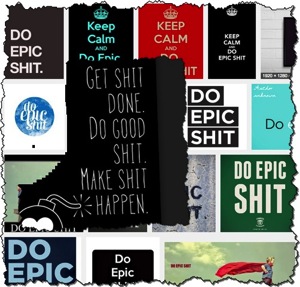 Some of the best and brightest, some of the most educated people I know, have decided that it’s cool to use the word “shit” to replace the old-fashioned words “things,” “stuff,” “work,” and so on. That’s too bad.

Of course I remember “get your shit straight,” a phrase that’s as old as the golden age of hippies in the late 1960s. That was as common as “groovy” back in the day. So, millennials: you hate “groovy,” right? Yeah, that feels old to me too. And I’m old. But did you have to adopt shit?

But, damn! Google “do epic shit” and you’ll find a meme that could have been — (but way less cool) — do good things or do good stuff. Except, of course, that then it would never have been a meme.

Back in the late 1990s I saw one of my favorite editors ever, Teri Epperly of Palo Alto Software, cringe when our website appeared one morning with the promise of “good stuff.” That, back then, was awkwardly informal, colloquial. And Teri was (is still) a really good editor. I helped her through that, then, as just a sign of the times. But she and I would agree completely on the use of “good shit.”