On Twitter, A/B Analysis, and the Art of Headlines

Headlines are critical. I’ve noted that, with some frustration (I’m not so good at headlines) on this blog before, here.

Headlines come up today because being in New York last week to  judge the Forbes.com business plan contest gave me a chance to visit with my son Paul, who lives in New York, and is CTO of Huffington Post. And he told me what they’re doing on the Huffington Post about headlines.

Why do you care? Maybe because (whether you like its political views or not) in the last 2-3 years Huffington Post has posted huge growth in traffic and advertiser and investor interest and visibility and traffic. So they have to be doing a lot of things right. And, if you’re writing or blogging, you should know about how they do headlines. 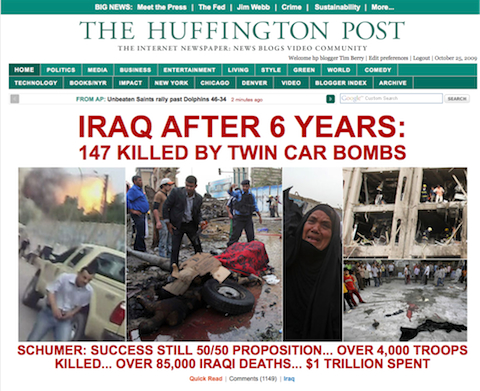 It starts with a lot of testing. Paul was quoted in How the Huffington Post uses real-time testing for headlines in Harvard’s Nieman Journalism Lab:

The Huffington Post applies A/B testing to some of its headlines. Readers are randomly shown one of two headlines for the same story. After five minutes, which is enough time for such a high-traffic site, the version with the most clicks becomes the wood that everyone sees.

And then there’s Twitter. As a Twitter user, I enjoyed reading Huffpost crowd sources headlines in Snoo.ws. Here are highlights:

Using the hashtag #headlinehelp, visitors will be able to click on a link to an article and help write an appropriate headline that fits the story. Through social byproduct, the best headline will filter through to editors.

The Huffington Post made its first attempt at using the hashtag late yesterday asking participants to replace the headline, “No, YOU Lie,” regarding a story about Rep. Joe Wilson’s interjectory fireworks during President Obama’s address to a joint session of Congress.

Hashtags are not perfect aggregators by any means, as previous use of them has seen contests hijacked and critical messaging spoiled. With Huffington Post’s reputation, they surely have gained some followers who may wish to use this idea in a negative way for the company.

How cool is that? I’d love to copy that idea. But reality rears up its ugly head: Huffington Post has hundreds of thousands of followers on Twitter; I have barely four thousand. Mine are smarter and better looking, but still …

Or no, perhaps, not so cool? Maybe data-driven headlines are a problem (quoting The Noisy Channel on this subject):

I’m sure this approach must rattle some old-school journalists. And there is a real danger of optimizing for the wrong outcome. For example, including the word “sex” in this message might improve its traffic … but to what end?

OK, good point, but the discovery that there are some words (sex, violence, naked, brutal) which get better results is nothing new. It’s older than I am (I posted about words I won’t put into titles despite the temptation on this blog a couple of years ago).  What’s new is the ability to test quickly and bring a crowd into it in a practical way.

It’s not about asking people what’s new, or changing the news content. It’s about headlines. And gaining readers.