How to Stop Micromanaging in 3 Easy Steps

How could anybody resist this title? How to Spot a Micromanager, on Liz Strauss’ Successful Blog. 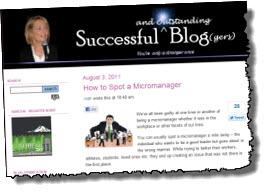 As I clicked I was guessing my answer: My guess was that the micromanager would be that person you know who is chronically frustrated with people asking him or her questions all the time instead of just doing things. His or her lament would be: Why don’t they take any initiative? Why does everybody ask me every little detail?

Micromanaging isn’t just what you do; it’s the natural result of what you did: you gave (or pretended to give, because you didn’t really give it) a job to somebody, then you second-guessed their decisions and complained about results. It’s cause and effect. Ask somebody to do something and then complain that they did it wrong, and they’ll never make a decision again.

That’s not exactly what that post said, but it was close enough. And that left me thinking about what might be much more important: how to stop being a micromanager. Here’s my prescription, learned the hard way, in three steps:

From what I’ve seen, micromanagers unwittingly create their own problem by making people ask them every detail. If you’re my boss and you don’t like what I decided, then I’m not going to make a decision again; I’m going to ask you. I’m going to ask you in excruciating detail. And it’s not my fault, it’s yours.

For the record, Liz’ post took a different angle, but I think it’s another view of the same problem:

You can usually spot a micromanager a mile away – the individual who wants to be a good leader but goes about in the wrong manner. While trying to better their workers, athletes, students, loved ones etc. they end up creating an issue that was not there in the first place.

The micromanager in many instances becomes just that because they want to make sure everything goes according to plan, their plan.

0 responses to “How to Stop Micromanaging in 3 Easy Steps”