Your lean business plan is no more than what you need to run your business. In the beginning, it might be as simple as an elevator speech. Be able to talk through those key points: the customer story, what makes you unique, how you’re focusing and on what you’re focusing, and, if it comes to that, your close — what you want from whoever is listening. 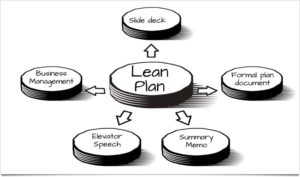 Or it might be a simple sales forecast, and perhaps, a burn rate in the very beginning because you know what you’re doing — maybe you’ve been doing it for years already and you don’t need to verbalize it right at this moment — and you’ll set those figures down and start tracking them.

Lean planning comes in many forms. Think of it as analogous to motion in athletics. In so many different sports, the winners practice economy of motion, repeated muscle memory. Another way to look at it: in design and mechanics, the fewer moving parts, the better. If you have to squint conceptually to see the key points, squint down on the elements you’ll be able to track and then revisit.

It’s not about the text, or the form of the thing, until that becomes related to the function. When you’re doing a business plan as part of a graduate business school class, then yes, it has to be complete and look good and read well; editing and format matter. When you’re doing a plan for an investment group that is going to pass it around among the partners, then it matters. But you don’t want to get bogged down in format when it’s just you and your spouse and you simply want to think through what’s required.

So the plan is a collection of concepts in the middle, surrounded by specifics that have to be done. The core of the plan is strategy and tactics, as simply as you can put them, just bullet points as reminders. Around the core you put a collection of milestones; numbers to be measured and tracked (lots of them are sales, expenses, and the like, but not all); task assignments and responsibilities for different people, dates and deadlines, budgets, and so on. That’s your plan.

From that core lean business plan, you spin off various outputs. You take the highest highlights of the plan and 60 seconds or so to explain it in an elevator speech. That’s one output. Or you write it all out carefully, and add supporting information about the market and the industry and the backgrounds of the management team, and it’s a plan document. Or you create a 20-minute 10-slide summary with PowerPoint or Keynote slides, and that’s a pitch presentation for potential investors. Or you create a cover letter or cover e-mail, about a page or so, along with a 5- to 10-page written summary, and that’s a summary memo. Or you do none of these, you simply keep that plan as a collection of bullet points, of picture financial projections, and a list of things to be done by whom and when and for how much money, and share it with your team. In that last case you don’t ever edit or polish it, or sweat the page headers and page footers or font size. You just use it to manage your company,

With all of these various iterations and outputs, always keep assumptions on top, where you can see them for every review meeting. Minding the changing assumptions is one of the significant advantages of the plan-as-you-go approach over the more traditional methods.

I ran a business for years during which the plan was shared only between me and my wife, mostly, enhanced by sales forecasts and burn rate. During those formative years there was no need for anything else. When it was time for an elevator speech, either one of us could do it. When there was need for a written business plan — it came up first when we first set up the merchant account to be able to accept credit cards, in 1988 — then we settled down for a while and wrote it out as it was, conceptually, at that time. We always knew what we wanted to do, but we also knew our key assumptions, and we tracked them as they changed, and revised the plan. A lot of that was verbal, between two people.

As the business grew, the verbal plan with the forecast stopped working. Things became more complicated. Employees needed to know about the plan and join in its formation and then its implementation. So we moved it into bullet points on the computer, and tied those to forecasts, and began tracking in a group, in more detail.

We then began to do annual plans more formally, writing out chapters, and conducting review meetings every month. With each annual plan we’d go out and take a new fresh look at the market. We had people doing nothing but marketing, and they developed segmentations and forecasts and supporting information. It was part of their job.

Are you recognizing yourself somewhere along this line?

Eventually we wanted to bring in outside investment. That was during the dotcom boom when valuations were very high, so we thought it would be a good time to lock in the value with some cash out. We produced very formal plans every three months during that period.