True Story: Flying Out of San Diego After the Outage

Yesterday at about 6 pm I was with a few dozen people in the terminal that United Air Lines uses in the San Diego airport.

Things did not look good. We’d been without power for more than two hours, and, according to what we learned via mobile phones and iPads and such — there was no wireless, because there was no power — the power was out for at least 50 miles to the north, maybe 100 miles to the south, and all the way to New Mexico to the east. Where I was, on the boarding side of security, the emergency generators powered only some dim lights in the main restrooms, the public address system, and nothing else. The cluster of United employees in the terminal had no computers working, and of course no skybridges to board or unboard people. San Diego, meanwhile, was in gridlock, heat of about 90 degrees, and the word from local hotels was no power, skeleton elevator service, and no water or power to the rooms. Somebody near me shared that the local power company said restoring power might take overnight. And behind us, security had stopped screening passengers when the power went out. 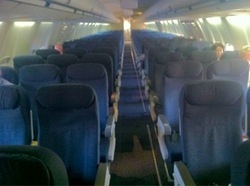 My wife, daughter and grandson were back at the hotel, so I was thinking that if things didn’t look better soon I might walk the four miles or so back (the San Diego airport is remarkably close to the city) there. We’d been attending the annual ASBDC conference in the Manchester Hyatt, but they were going to stay one day longer than me. The walking option would have been without my bag — I almost never check luggage, but yesterday I did because I was carrying some stuff related to a daughter having just moved — and it wasn’t clear that taxis were going to be available.

I considered renting a car, maybe collecting my hotel-bound refugee family, and driving north to Los Angeles, but then it occurred to me that the rental process required electric power. And outside, within sight of the terminal, the interstate looked stopped dead, like a parking lot.

Not that the hotel sounded like a great option: Yes they had emergency power so one of every three elevators worked, but it wasn’t enough power to light the rooms or, worse still, pump water to the rooms. Their room is on the 32nd floor. But if the power didn’t go on, I guessed, that would be better than spending all night in the unlit terminal.

That was about when one of the United employees announced — the public address system worked — that those of us who were in the terminal, through security, with seats to San Francisco, were going to be loaded up by stairway on a plane going to San Francisco.

And I wrote the first draft of this post on that plane. They took down our names by hand, the old fashioned way, and walked us down a stairway to the tarmac and up a stairway to the plane. There are 12 of us on board, on a B757 jet that seats 182. It left two hours after the scheduled time, so I missed my connection to home in Eugene, but that wasn’t so bad. The illustration on this post is that empty plane.

Yes, I was glad to be out of the airport and power outage and flying to San Francisco, one of the lucky 12 that arrived early enough to be through security when the power went out. But damn, I worried about a long and unpleasant night for my wife and daughter and grandson. And I hoped they would get it fixed so they could make their flights today.

Is there a moral to this story? Not really. I’m just sharing my good luck in being at the right place at the wrong time. Gratitude is good, we all tell each other the bad travel stories, and this one worked out.

Update: the power came back at the hotel around 3 am. And I got back home shortly after midnight. As of this morning, San Diego is back to normal.