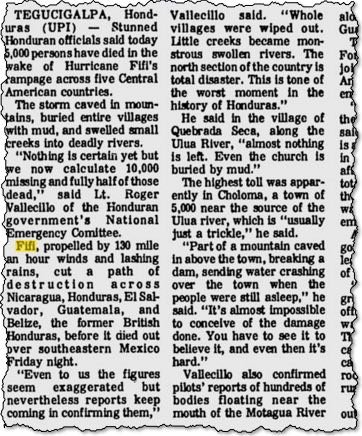 This is not the “flies buzzed” story. I can’t find that one. But this is a story I wrote about that hurricane.

I don’t even have the piece. It was lost in the 42-year shuffle. But it started with “Flies buzzed” and went on to describe the third day after a brutal hurricane with flooding that killed tens of thousands. At the time I was night editor for Northern Latin America for United Press International (UPI).

The name of the hurricane spoiled the story when I tried to tell it to my kids as teenagers. Hurricane Fifi. Damn, that sounds silly. My kids giggled. But you can look it up in Wikipedia. Honduras, September of 1974. Oh, and when you look it up, you’ll discover that history recorded it as 5,000 to 10,000 people dead. I reported an estimated 30,000 dead. I had a valid source for that – a colonel in the Honduran military, Eduardo Sandino. It’s an easy name to remember because he increased his death toll estimate every time I checked in with him. And every time he did, with the obvious ulterior motive: “We need helicopters,” he said, every time we talked. “Tell them we need helicopters.”

Second, journalism. I was a single reporter in country for United Press International, competing with a team of seven people for AP. I won the story. I spoke fluent Spanish and found the official sources. They understood what they could get, for their country, by increasing the estimated death toll.

Third, more journalism. I believed the estimates Col. Sandino gave me. Every day for the better part of a week, I hitchhiked on private planes from the airport in Tegucigalpa to the airport in San Pedro Sula that was closest to the mudslides that caused most of the damage. A dam broke above the village of Choloma. I worked hard to get real information, validated by officials who went on record with name and position. And the information I published, it turns out, years later, was wrong. The death toll had been exaggerated. But the journalistic ethic was intact. We are all subjective. We strive for objective truth, as the goal. Sometimes we fail.

Does that tell you something worth understanding about Journalism?